5 applications of drone technology in agricultural

Drones  are ushering in a new agricultural revolution,  Estimates suggest the agricultural market for the machines will be in the billions of dollars in the coming years. As farmers try to adapt to climate change and deal with other challenges, Sylvester says, drones promise to help make the whole farming enterprise more efficient.

The drone technology “is already there,” says aerobiologist David Schmale at Virginia Tech in Blacksburg. But what’s rapidly advancing is the cargo the drones carry. “What you are seeing now is drones becoming the vehicle for really cool sensors,” he says.

When outfitted with cameras and other data-gathering devices, drones provide an “eye in the sky,” scouting for plant pests or dry spots in need of more attention. In some countries, drones are already regularly used to deliver fertilizers or pesticides; an estimated one in three bowls of rice served in Japanese homes is grown with the help of pesticide sprayed from an unmanned helicopter. Other tasks have yet to become mainstream. US farmers, including grape growers in California and New York, have been experimenting with drones to survey for areas of “low vigor” where water may be lacking or soil isn’t up to snuff.

Drones will probably soon become a standard piece of farm machinery. Here are some examples of the many potential jobs for these flying robots:

Monitoring fields takes time and manpower. Drones can sweep through and take stock, inspecting for slow-growing plants that might need a hit of nitrogen or some other remedy. Sensors that measure particular wavelengths of light absorbed and reflected by plants can generate color contrast images that highlight problem areas in a field. Images generated from these data include NDVI (normalized difference vegetation index) maps, which have long been created using satellites and airplanes by calculating the ratio of the difference of near-infrared and visible light radiation. Newer sensors take advantage of additional wavelengths in the light spectrum and may add filters and other resolution-enhancing tricks. Not only can soil, crop and forest be told apart, but sick plants can also be spotted because stressed or dehydrated plants reflect light differently. Recent research shows that this spectral data can reveal crops that have been injured by the drifting pesticide dicamba, and can spot herbicide-resistant weeds growing between rows.

Cattle ranchers with lots of land to cover are using drones to keep track of their livestock and survey where fences need fixing. When outfitted with infrared drone agriculture, drones can also help survey for unwanted animals that might be ravaging a herd. (Such drones have also become a tool for tracking human poachers in places ) 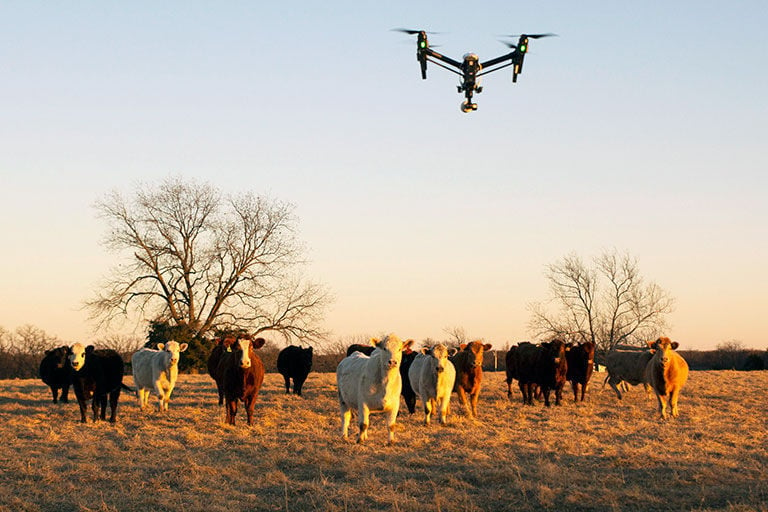 Without close scrutiny, pathogens that wilt, wither and otherwise damage crops can escape detection and spread. While spectral imaging technologies can reveal yellowed plants within fields of green, Virginia Tech’s Schmale is using drones to ferret out high-flying pathogens before they even land. He has captured airborne spores of the fungus Fusarium graminearum, which can devastate wheat and corn, that have traveled kilometers and more. If a farmer knows of a pathogen outbreak in a nearby county, air sampling could provide an alert to its impending arrival. Federal and state agencies could also monitor for pathogens at a larger scale, allowing farmers to be at the ready before outbreaks occur.

Many fields aren’t uniformly flat. Some sections may dry out faster than others or be missed by watering equipment. Spectral and thermal imaging can reveal dry spots where crops will wither. Imaging can also detect leaks in equipment and irrigation canals. What’s more, farmers can assess the topography of their land with airborne laser scanning technologies or software that stitches together thousands of high-quality aerial photos into 3D maps. These maps can identify water catchments, reveal the water-flow direction at the base of each tree in an orchard and identify other land features that influence both the health of the crop and where soil erosion might become an issue.

Actual bee drones don’t help with pollination, but the flying-robot sort may one day lend an assist to real bees. A New York–based start-up has developed pollen-dumping drones that have helped pollinate almond, cherry and apple orchards. The company reports that its drones can up pollination rates by 25 percent to 65 percent, though outside analyses verifying those numbers are yet to be done. But some fruit growers are optimistic that the drones could prove useful in orchards, especially if a cold snap keeps live bees hive-bound during the trees’ flowering window.