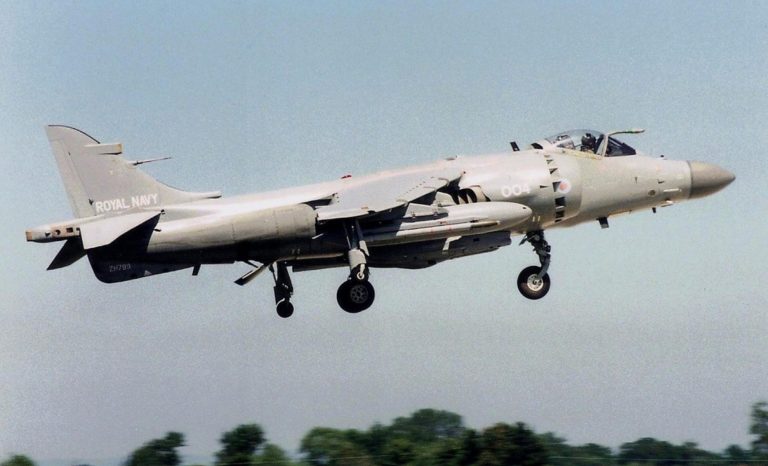 Ed.'s Note: As a US Marine Corps Harrier jet crashed off the North Carolina coast last week, and India is about to retire the last of its Harriers, read our explanation of what makes the infamous jet both exhilarating and exasperating.


An AV-8B Harrier jet crashed into a strip of residential homes in Imperial, California this week, destroying three houses. Last month, another Harrier crashed in the desert south of Phoenix. Both pilots ejected safely and no one was injured in either crash.


The Harrier is among the coolest, most ingenious aircraft ever designed, but the downsides of its design and a long history of failures mean these most recent crashes are hardly surprising.
Developed in the 1960s, the Harrier is marvelous for its ability to hover like a helicopter. The jet engine pumps air through four nozzles, two on each side of the fuselage, right under the wings. They rotate to propel the plane forward or straight up, allowing for very short takeoffs and vertical landings（VTOL）, and unchaining the plane from the need for long runways. The Harrier can operate out of clearings in the jungle (think Vietnam), a landing dock designed for helicopters, or downtown Miami (where Arnold Schwarzenegger uses one to win the day in “True Lies”).

The Harrier was developed by the British and acquired by the United States Marine Corps, the only American military branch that operates the plane. After American firm McDonnell Douglas took over production, the Harrier entered service in 1971.

The first Harrier, the AV-8A, had a horrific safety record; more than half of the planes crashed. The second generation AV-8B, produced by Boeing, entered service in 1985. It's much safer, but still compares poorly to other jets. According to an 2002 LA Times report, the AV-8B Harrier suffered 11.44 accidents per 100,000 flight hours, compared to just 3 for the F/A-18 Hornet. Between 1971 and 2002, 45 Marine pilots were killed in 143 noncombat accidents in Harriers.
The 131 Harriers currently operated by the Marines haven't been as useful as their promoters hoped. Taking off vertically limits how much weight the jet can carry, so the crew needs to skimp either on fuel or on weapons payload. Less fuel means less range, which limits usefulness.

“It’s not a very good airplane when you consider everything about it,” said Pete Field, an aviation consultant who served as a Marine officer and Navy test pilot.

The Harrier is supposed to be replaced by the F-35, the Lockheed Martin top-of-the-line warplane that promises supersonic speed, radar-evading stealth, and excellent agility. One variant will have the same short takeoff and vertical landing capability as the Harrier. Problem is, the F-35 is massively over budget and behind schedule, and the versions that do eventually take off won't be nearly as great as early designs indicated. So we're stuck with the Harrier for the time being.
Complications
In cruise mode, the Harrier flies just like a normal jet. At slow speeds, it's a lot more complicated. Pilots can aim the nozzles downward to generate lift, but that doesn’t mean it’s easy to keep the plane stable.

Colonel Bill Lawrence (Ret.), who has flown 130 types of aircraft as a Marine Corp pilot and Navy test pilot, compared controlling the Harrier in hover mode to balancing a model airplane on the point of a pencil. If the plane starts to roll, "it can get very quickly out of control." Watch an early video of the Harrier in testing, and you see how much trouble the pilots had keeping it parallel to the ground.

On top of everything associated with flying a conventional jet, Harrier pilots have to correctly angle of the nozzles, based on wind and runway conditions. They also have to deal with the reaction control system, a series of nozzles used to keep the plane level. The nozzle in the nose blows air down, the two in the wingtips blow up and down, and the one in the tail blows down and side to side.

In the first generation AV-8A Harrier, all those controls were mechanical—basically a pile of levers. That made for a lot of work, especially for pilots who grew up flying conventional planes and had to adjust to aerodynamics associated with helicopters. The next-generation AV-8B came with digital flight controls that made things much simpler, but the accidents have kept on coming.

The ability to fly slowly, so useful to Arnold, is a major liability if the engine gives out. Less speed, especially at a low altitude, means less ability to maneuver the jet to a safe location before hitting the ground.

The Harrier that crashed in Imperial this week was less than 70 miles from the Marine Corps Base in Yuma when it went down, so the pilot may have been in a landing pattern and flying at reduced speed. "If he was doing that, then his ability to deal with an engine out was restricted," Lawrence said.

That may explain why the pilot—trained to avoid collateral damage when crashing—hit three houses instead of the surrounding empty fields, the nearby desert, or the airport in the middle of town.