Teledyne will acquire FLIR Systems for US$8 billion 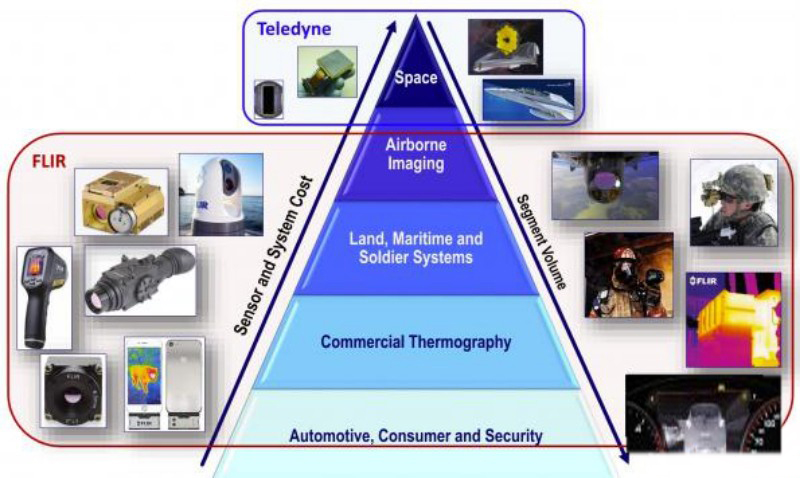 Teledyne Technologies Incorporated and FLIR Systems, Inc. jointly announced that they have reached a definitive agreement under which Teledyne will acquire FLIR in cash and stock transactions worth approximately $8 billion.


According to the terms of the agreement, FLIR shareholders will receive $28.00 per share in cash and 0.0718 shares of Teledyne common stock at the price of each FLIR share, which means the total purchase price per FLIR share based on Teledyne’s 5-day trading volume weighted average price It’s $56.00.

The net leverage at the end of the transaction is expected to be approximately 4.0 times the adjusted EBITDA, and the leverage will be reduced to less than 3.0 times by the end of 2022. Teledyne expects that the acquisition will immediately increase revenue, excluding transaction costs and amortization of intangible assets, and increase GAAP revenue in the first full calendar year after the acquisition.

"The core of our two companies is proprietary sensor technology. Our business model is also very similar: we each provide customers with sensors, cameras and sensor systems. However, our technology and products have minimal overlap and have Unique complementarity, with imaging sensors based on different semiconductor technologies at different wavelengths," said Robert Mehrabian, Executive Chairman of Teledyne.

"For two decades, Teledyne has demonstrated its ability to consistently and predictably compound earnings and cash flow. Together with FLIR and optimized capital structure, I am confident that we will continue to provide our shareholders with substantial returns." "FLIR A commitment to innovation across multiple sensing technologies has allowed our company to grow into the multi-billion dollar company it is today."

FlyDragon FDGD502 thermal imaging drone camera has a resolution of 640*512. The temperature measurement function includes real-time monitoring and display of the center point, maximum temperature, minimum temperature and average temperature of the video screen. The target positioning function is to intelligently calculate the longitude and latitude coordinates of the center point of the video screen or military Gaussian. Rectangular coordinates (6 degree band), the tracking function is an external (quickeyes) video tracker.
1. iRay 12μm high-quality thermal imaging module
2. Thermal image pseudo color switching
3. Support video target tracking
4. Military 1600m high-precision laser ranging
5. Target coordinate positioning
6. Two-way integrated video encoding optimization
7. 360° rotation
8. Quick release design
9. Three-axis stabilization and anti-shake
10. Intelligent temperature measurement
11. One-key switch between SBUS and network port output
The FDGD502 optoelectronic pod is precision machined from aviation aluminum alloy and high-strength nylon. It has high strength, good vibration absorption, rain resistance, dust resistance, and corrosion resistance. The refined circuit system can work stably under low temperature conditions of -10°C. , Can adapt to the harsh field working environment.
FDGD502 uses a three-axis stabilization gimbal to keep the camera stable during intense movement. The pan-tilt and the aircraft work closely together, and the high-speed processor controls the precise operation of the motor to compensate for every subtle movement, so that the camera maintains a stable shooting angle, and can shoot clear and stable pictures even in high-speed flight and severe vibration.
FDGD502 integrates IRay’s new generation 35mm focal length, 12μm high-quality thermal imaging module, and military 1600m 905nm laser beam wavelength high-quality laser ranging module, and has undergone strict optical axis parallel alignment to ensure laser ranging targets It is always located at the center point of the visual acquisition screen, and transmits the angle motion data and target distance information of the three-axis pan/tilt through the serial interface.
FDGD502 has a target positioning module. Through the GCS APP software, it can intelligently calculate and display the longitude and latitude coordinates, military Gauss rectangular coordinates and elevation information of the target. The target coordinate data can also be sent through UDP or TCP protocol, and at the same time, it can be displayed on the high-resolution satellite map. It displays the position information of the aircraft, the target and the operator in the middle, and supports the visual acquisition picture and the satellite map picture-in-picture display. In the long-distance reconnaissance, precise determination of the coordinates of the control points, correction of artillery firing, and visibility of the battlefield overview.