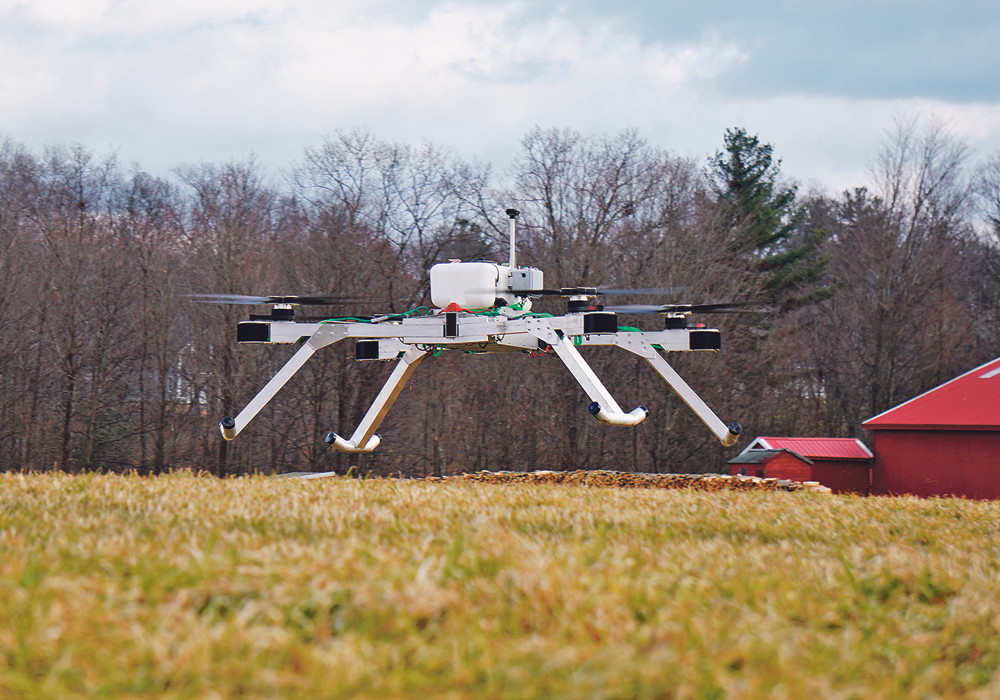 The KIWI Aerial Utility Vehicle weighs in at 1,200 pounds and has a 50-gallon payload and a 30-foot spray boom, which is not mounted. | KIWI photo

Robots that have crept out from the fighting pits have spawned a massive drone that will soon take on agricultural pests.

The KIWI Aerial Utility Vehicle weighs in at 1,200 pounds and has a 50-gallon payload and a 30-foot spray boom.

“If you’ve ever watched the TV show Battlebots, they’ve been on that show. They’ve been building robots and electric vehicles for a long time, like more than 15 years,” said William Chen of KIWI Technologies.

“They thought they have the knowledge of building big, heavy duty and durable electric drive trains and power systems but wanted to find ways to apply their skills besides just fighting robots.”

He said existing drones used to spray agricultural crops are too expensive to operate because they are too small, even for spot spraying.

“The largest one on the market has something like a four-gallon capacity. That’s not really going to work when people want to spray five gallons per acre or more,” Chen said.

“The unique space for us will be in precision ag, or maybe if your field is shaped awkwardly or there is some obstacles in the way, but we are still able to get out a decent enough volume.”

He said the 500 lb. payload capacity of the KIWI drone allows the KIWI application system to compete with entry-level helicopter sprayers, but operation and maintenance expenses are lower.

The drone’s props are 72 inches in diameter and the craft uses four electric motors that supply about 85 horsepower each.

“We’re thinking about a system with two of the drones plus a ground station with a supercharger that can charge them up real fast,” Chen said. The drone’s props are 72 inches in diameter and the craft uses four electric motors that supply about 85 horsepower each. | KIWI photo

The drones have a 20-minute run time, and it takes about 30 minutes for them to recharge at the station.

“That way you can have one working the field while the other one charges to maximize your up time,” Chen said.

He said operators will load the drone with product and plug it in to the charger when it returns, and then just push a button and it will launch and apply product autonomously.

The drone’s frame is made out of aluminum, and the flight control system is built in-house.

KIWI Technologies is a start-up that’s only a year old and has little expertise in agriculture. The company is looking to work with universities or industry partners to help fine-tune the spray drone. For instance, the company is still researching the optimal boom size and nozzle configuration.

Chen said before the system is available for purchase, the company plans to use the drone in an application service capacity. This will give the company time to fine-tune the application system and to work with regulatory authorities on the rules for agricultural product applications by large drones.

“We are trying to figure out who our first partners, our early adopters, are going to be. Then we have to scale it out from there. If people are interested they should definitely reach out to us on our website,” he said.

PREVIOUS：Now, start-up develops drone to spray pesticide NEXT：PHL farms to take flight in the future as government supports drone use