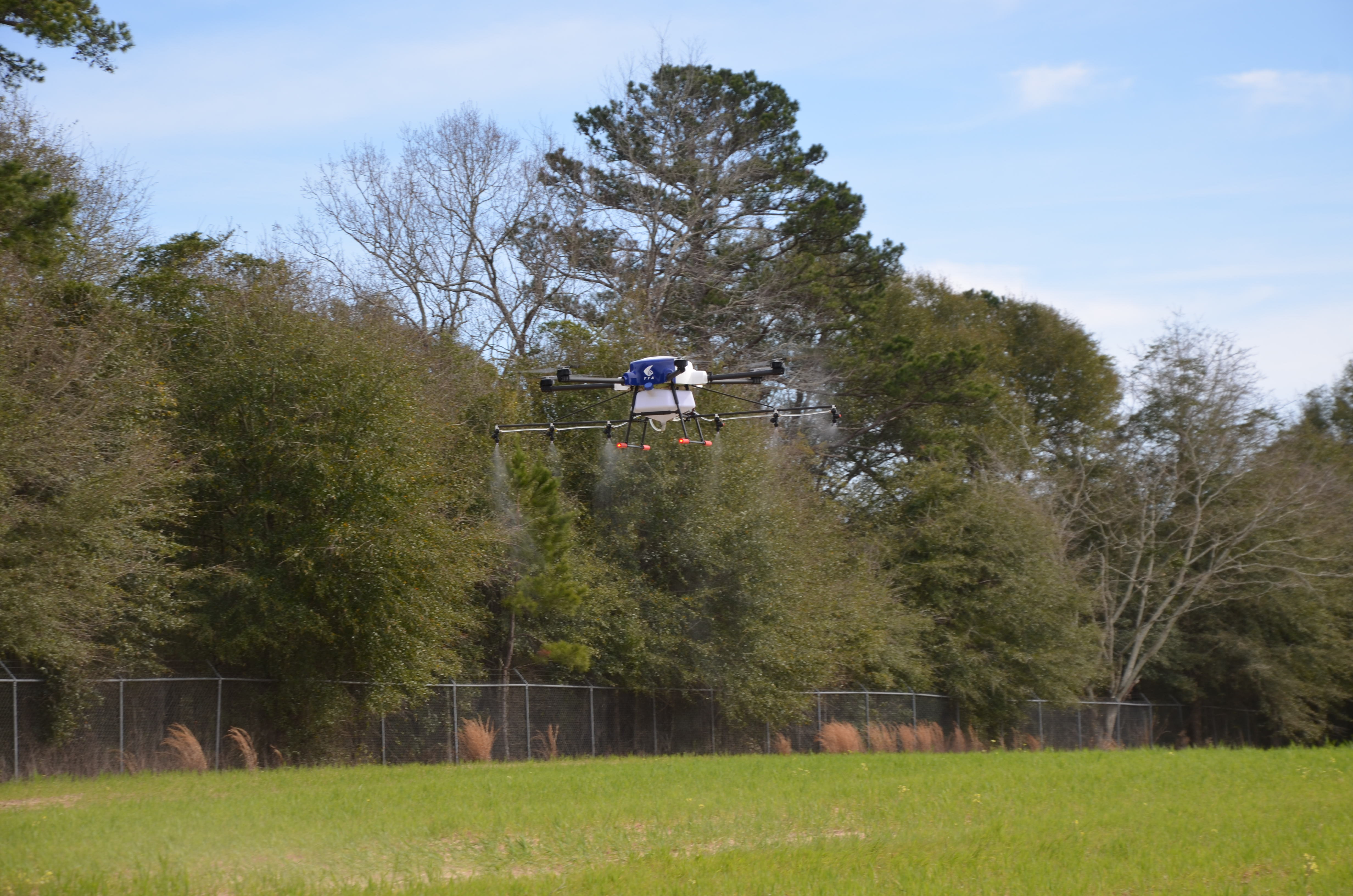 The sun was out but the morning air was chilly. Tyler Wooley was leaning over a table, squinting to see the image on the computer screen. His brother, Clint, was filling a liquid receptacle with water and their dad, Drew, was talking “shop” with members of the Brundidge Rotary Club.

The Wooleys were preparing for takeoff at Cattleman Park. But they were not leaving the ground.

The Wooleys are partners in a venture they believe is the future of agriculture – efficiency through technology. And they are in on the ground floor of this innovative approach to agriculture. Drew Wooley said only the sky is the limit to the possibilities.

When the Wooley boys were growing up, they were fascinated with drones, which are aircrafts that operate without a human pilot onboard. Their dad shared their interest and, perhaps, even fueled it.

The drones the young Wooley brothers were flying were “simple” robotic planes that were primarily entertainment for sunny Sunday afternoons.

The Wooley brothers are still fascinated with drones, so much so that they have joined their dad in the formation of EcoSpra Aerial Services, headquartered in Gulf Shores.

unmanned aerial vehicles (UAVs) are the wave of the future – that the sky is literally the limit.

Today, there are many different kinds of drones and they are used for many different purposes. EcoSpra Aerial Services’ focus is on agriculture, primarily crop dusting and is the first such service in Alabama.

So the Wooleys said sometimes the grass really is greener.

“With EcoSpra, you don’t have to choose between profitability and environmentally-friendly farming.”

While the Wooleys’ words might be construed as a bit of advertising, they addressed the high-flying changes in the face of agriculture.

Not only are drones more efficient, they are also more cost-effective while reducing the amount of labor. That’s not advertising. It’s the future of agriculture.

EcoSpra is based in Gulf Shores, but all of Alabama is fertile ground for UAV crop dusting.

“I could see how using a drone to dust crops could be a big benefit to farmers,” Garrett said. “There are just so many ways that the technology can be used. Drew and Clint are insurance adjusters and they use drones to survey damage on roofs without having to climb up on the roof. So, it’s interesting to know about that technology even if you aren’t a farmer.”

Garrett laughingly said when observing the Wooley’s drone at work, he thought it could be turned upside down and used as a lawnmower.

“With the technology we have today, anything is possible,” Garrett said. Tyler used a computer to make the flight plan for the area that was to be sprayed. For the demonstration, Clint “fueled’ the tank with water, checked the batteries and cleared the drone for takeoff.

Clint explained that the drone would dust the “crop” from between 10 and 15 feet and could spray about 20 acres in an hour.

Once the drone is airborne, it follows the fight plan, dispensing the right amount of liquid. An advantage of the drone over an airplane duster is that the drone can fly lower so there will be less liquid drift and, therefore, less liquid cost.

If the drone is low on liquid or the batteries are low, it will come back to the staging area for a pit stop.

“It’s amazing what drones can do,” Tyler said.

But there are improvements to be made. The batteries for the drone are heavy so the tank is limited in size.

“Drew said the development of a gasoline engine would reduce the weight on the drone and that would allow for a larger tank,” Garrett said. “This crop dusting drone has a lot of possibilities and, as improvements are made, it will be more beneficial to farmers, even small farmers,” Garrett said. “It will be big change but farming has changed a lot in just the last few years. And with the technology that’s available, it will keep changing.

It was not too long ago that farmers were scared to take their mules out of the field and give the work over to those mechanical monsters called tractors.

Farmers often had to put their mules back to work pull their tractors out of the mud.

“Drones don’t get in the mud,” Clint said, with a smile.