Drone spraer have been popularized in Japan

AgriDrone, while highly advanced, is not the first such machine to be deployed in agriculture in Japan – farmers have been using unmanned aerial vehicles since the mid-1980s to dust crops. 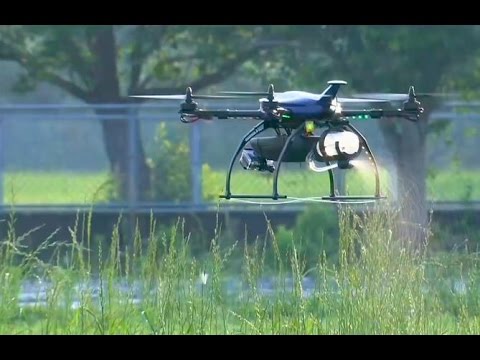 The machine, called “AgriDrone”, was created in partnership with the Tokyo-based IT company OPTiM and Saga University’s faculty of agriculture.

The drone can pinpoint good and bad grazing areas using video analysis software, and can also monitor a grazing area to send real-time alerts when animals leave a designated area or if a predator approaches.

The machine can also detect livestock with abnormal body temperatures that may indicate they are ill, pregnant or are in heat.

AgriDrone, while highly advanced, is not the first such machines to be deployed in agriculture in Japan – farmers have been using unmanned aerial vehicles (UAV) since the mid-1980s to dust crops.

Although quite widely used, Japan’s ministry of agriculture, forestry and fisheries (Maff) does not record the number of farmers using drones for crop spraying, says Naoyuki Fukumoto, a technical official at the food safety and consumer affairs bureau of the ministry’s plant protection division.

These can monitor deer and other animals to better control where pesticides are used in order to minimise the damage to wildlife, says Shunsuke Goto, an official at the ministry’ technology policy office.

One example of drones used for crop dusting is Ichikawa Farm in Asahikawa on Japan’s big northern island of Hokkaido, which uses UAVs for fertilizing rice.

Part of a “Drone Rice Project” with two other rice farmers, Ichikawa Farm grows only organic rice. The drone films the spraying of organic fertilizer, and the farm’s website says it is easier this way to demonstrate that the crop is really grown organically.

Shinji Suzuki, a professor in the department of aeronautics and astronautics at the School of Engineering of the University of Tokyo, points out UAVs are important as there is a serious manpower shortage in the country’s agricultural sector. “Drones are already used for spraying pesticides and I think that in the future they will also be used to monitor crop growth,” he adds.

Akihiro Takahashi in Katori, Chiba Prefecture, already does that. Mr Takahashi runs a one-hectare farm in the town of Katori growing mostly pears on about 200 trees, but also chestnuts, kiwifruits and persimmons. His grandfather, Takeo, started the farm about 80 years ago. However, his father, Katsumi, wanted to retire at 74 – five years ago – and cut down all the pear trees. In response, Mr Takahashi, now 54, quit the IT job he had held for 25 years to restart the farm.

Chiba has the largest cultivated area, highest yield, and highest output of pears in Japan, according to the Chiba Prefecture government. Based on his experience working in IT, Mr Takahashi thought of using drones for the farm. He says he did not want to follow his father who had endured hard physical labour daily to work the farm.

In addition, Mr Takahashi does not have any children who could lend a hand and his wife did not want to step in. “So I have looked for other ways to make my farm strong,” he says.

Mr Takahashi uses a dji crop duster made by the Chinese company, which can fly for up to 28 minutes without recharging, using GPS for autonomous flight. Equipped with a camera for aerial photography, the drone checks the nets Mr Takahashi covers his orchards with to prevent birds eating the pears and its mapping system is used to record crop growth and check over the entire farm.

Mr Takahashi says the drone makes it much easier – and quicker – to check each tree carefully. “That is important because if you have any pests, you must be able to spot them early and stop them early,” he says.

He also uses the dji crop duster to promote his farm and produce online. “Customers come to my farm because they have seen it on the internet,” he says.

Drones can monitor agricultural lands on a much broader scale and in much shorter time than a farmer can. Using a drone, farmers can also conduct this monitoring frequently without much effort, says Sawahiko Shimada, a professor at the Tokyo University of Agriculture’s faculty of regional environmental science.

“[With drones freeing them from physical labour] farmers can devote their time to analysing and planing where to fertilize, weed or apply pesticide, and when to harvest,” Mr Shimada says.

Nowadays, a drone can be purchased very cost-effectively and if farmers can learn how to handle this new tool, the possibilities are vast, Mr Shimada says. In addition, he says, it is becoming easier to use drone data in agriculture.