The changing face of agriculture: From sharecropping to drones

Paulo Flores, asked about his background, says he grew up in Brazil in a poor family that raised crops on shares. He talks of earning a doctorate in soil science in Brazil, eventually coming to the United States to pursue his career. 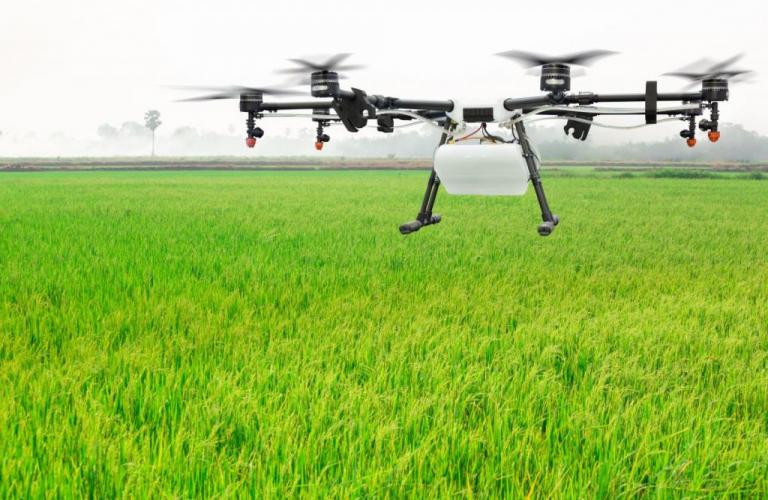 A little later, his wife, Cari, arrives and says, "Has he told you about his background? That he's one of 16 children? That his parents are illiterate? He (Paulo) wanted to continue his education, but his dad said, 'No, you're going to be on the farm.' So he left home at 14 so he could continue his education. He went on to get his Ph.D."

She smiles and says, "It's inspiring."

Paulo, choosing his words carefully, says, "Well, it's been an interesting path. It was an interesting experience growing up. But I don't want to go back to those days."

Today, Paulo Flores' career is soaring. He's a precision agriculture specialist with North Dakota State University's Carrington Research Extension Center, where he work with drones and other precision ag tools. Drones, also known as unmanned aerial vehicles, or UAVs, have been one of the hottest topics in Upper Midwest ag.

"I've always been interested in using computers in agriculture, and that's basically what's involved in precision ag," he says.

Flores' first professional gig in the United States was working with forage quality and soil fertility at Virginia Tech University.

In early 2014, he came to Carrington to serve as nutrient management specialist. He spent several years in that role, before switching to precision ag specialist in December 2016. Though there's widespread agreement that drones can play a major role in agriculture, it's not fully clear how to incorporate them successfully into farming operations — which Flores is working to help achieve.

Paulo and Cari live on the Carrington Research Extension campus with their son, Clayton, 8. Cari is homeschooling Clayton, whom she describes as "several grade levels above his age."

He began reading at age 2. He tackled his first Harry Potter novel at age 5 — Harry Potter is a fictional young wizard popular with teens and adults — and now has read all the Potter books.

Clayton began multiplying on his own "very early, too. It wasn't me (responsible for it). I supported it, I knew how to support it," Cari says.

Clayton's educational needs include visiting museums and shows, which are uncommon in rural North Dakota. Carrington's population is about 2,100. So the family expects that some point they may move to a bigger community with more educational opportunities.

Like many boys his age, Clayton enjoys swimming and playing soccer and baseball. "I'd like to bungee jump, but there's no place here to do that," he says.

Asked about his likes and dislikes in school, he says he doesn't enjoy vocabulary — though he has an exceptionally good one for his age.

Clayton is a dual citizen of Brazil and United States with two passports. He used them earlier this summer when he and his parents took an extended trip to Brazil, where they visited friends and Paulo's family.

"It was good to see my family again," Paulo says.

Paulo, though not a U.S. citizen, has worked long and hard to become one.

"I don't think people realize how expensive and time-consuming it is. There are so many steps along the way," Cari says.

But Paulo's application for naturalization was approved recently, and he expects to become a U.S. citizen in the next few months.

No, it's not next to Portugal

Paulo and Cari met at Virginia Tech, where Cari was working on a master's degree in education. She's a U.S. citizen and self-described "military brat" who lived primarily in big cities growing up.

Big cities and largely rural North Dakota "both have their charms," she says diplomatically.

The winters are a challenge, especially for Paulo. Brazil, an agricultural powerhouse and the largest country in South America, generally has a much warmer climate than North Dakota.

"It's not so much how cold it gets. It's the length; it's such a long winter. It gets to you, especially when you have small kids and live in a small town," Paulo says.

Some Americans can't locate Brazil on a world map, and some believe it's next to Portugal, Paulo says. (Portugal and neighboring Spain, of course, are nearly half a world away on Europe's Iberian Peninsula. But Portuguese is Brazil's official, primary language, so there's a linguistic connection.)

Paulo says he sometimes wonders if earning all his degrees in Brazil will work against him professionally, if having at least one of the degrees from a U.S. institution would benefit him.

Cari says she's proud of how Paulo has improved his English language skills and ability in giving group presentations.

Paulo and Cari say they're open to moving from North Dakota at some point.

"Winter isn't easy. It would be good to have other things to do. And he (Clayton) has his own needs when it comes to education, Paulo says. "We're probably not going to stay here forever."

The face of agriculture is changing. Literally. By gender, ethnicity and birthplace, the people who live and work in area ag are increasingly diverse.

The gender change is sweeping and obvious. Yes, women have been essential to area agriculture since the first homesteaders began planting crops and raising livestock. But reflecting transition in society overall, women are playing a broader, more varied role in agriculture — frequently serving in positions once held almost exclusively by men.

One example: About 55 percent of U.S. veterinarians are women. That rate will continue to rise since more than 80 percent of veterinary medicine students are female.

The changes in ethnicity and place of origin aren't as widespread or noticeable. People of Northern European descent, primarily but not exclusively Scandinavians and Germans, still dominate area ag. The Upper Midwest was settled primarily by people from Northern Europe, and their descendents still handle front-line crop and livestock production in rural areas, where local economies typically offer few non-ag jobs to attract people from outside.

"Go back to the 1920s, and in the rural areas we've had outmigration (more people leaving than coming in)," says Kevin Iverson, North Dakota state demographer. "When you have that, the (remaining) population doesn't tend to mix. You stay pretty much the way you were. There isn't new coming in."

According to U.S. Census Bureau 2017 estimates of ethnic origin, "white alone" accounts for

Keep in mind that those are statewide averages and that the percentages are much higher in rural countries. For instance, "white residents" account for 96.2 percent of the roughly 3,000 residents of Nelson County in north-central North Dakota.

But that's changing, says Iverson, who notes that North Dakota's black population has tripled since 2010.

Most minorities who come to North Dakota move to cities, not rural areas, so the change isn't always visible in rural areas, Iverson says.

Even so, and though firm statistics are tough to come by, people born outside the region and whose ethnicity isn't Northern European are playing a larger ag role here, typically in positions that support farmers and ranchers.

This edition of Agweek — which kicks off a three-week series on the changing face of Upper Midwest agriculture — features two agriculture scientists, one born in Brazil and the other in Cameroon, who are working and raising their families in North Dakota.

Week two will look at an eastern Minnesota woman with close personal and professional ties to the cattle industry.

Week three will cover a northwest Minnesota farm woman who's carrying on the family farm after the death of her husband.