In the middle of a muddy field next to a reservoir in north-western Malawi, a team of scientists are hard at work. Boxes of equipment lie scattered around a patch of dry ground, where a scientist programmes an automated drone flight into a laptop perched on a metal box. The craggy peak of Linga Mountain (‘watch from afar’ in the local language) looms over the lake, casting its reflection in the water.

With a high-pitched whirr of rotor blades, the drone takes off and starts following the shoreline, taking photos as it goes. Once the drone is airborne, the team switch from high-tech to low-tech mode. They collect ladles, rulers and plastic containers and squelch through mud until they reach the water’s edge.

The scientists measure the water depth with a ruler and carefully ladle water into the containers. Using a mobile app, they record the GPS location of each sample. Back on dry ground, they count the number of mosquito larvae in each container.

Malaria is one of the top three causes of death among children under five years old in Malawi.

A team from Liverpool School of Tropical Medicine and Lancaster University have been doing the same thing for two weeks at five reservoirs in Kasungu. They are collecting data to identify mosquito breeding sites, so that the larvae can be controlled, reducing the number of adult mosquitoes able to spread malaria.

“We stitch together the drone photos to create an aerial map of the reservoir,” says Michelle Stanton, one of the scientists on the team. “Our water samples tell us where the mosquito breeding sites are, and we can plot these on the map... We can [then] identify the common features of these sites and predict where other breeding sites are.” 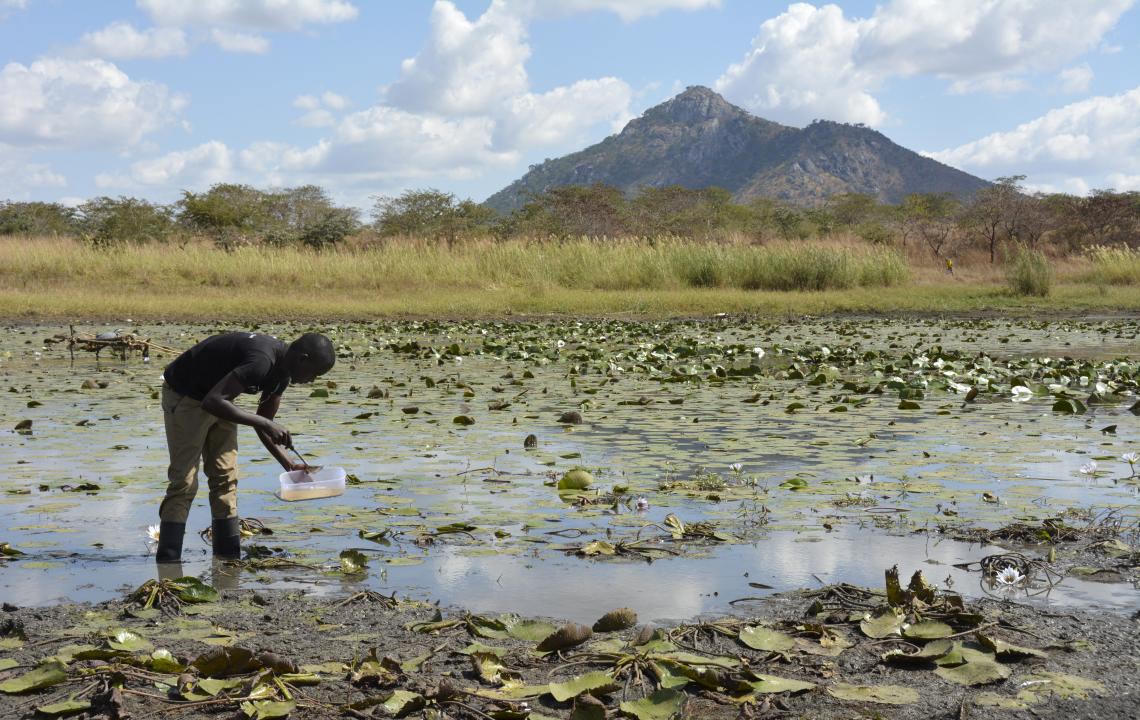 Malaria is a serious issue in Kasungu District and other parts of Malawi. Along with pneumonia and diarrhoea, it is one of the top three causes of death among children under five years old. The disease is preventable and easily treatable if caught early, but if untreated quickly leads to severe complications and death.

Previous efforts to control malaria include distributing bed nets and posting health surveillance assistants in hard to reach areas. These assistants hold regular clinics for children under five and carry rapid diagnostic kits and malaria medication to treat any cases they find. For complicated cases, they provide initial treatment and refer the child to their nearest health facility.

At Kasungu District Hospital, there is a long queue of mothers and children waiting in the morning sunshine outside the Under Five clinic. In a corner of the waiting room, health surveillance assistant Zondiwe Nyirongo sits wearing white plastic gloves and an apron at a desk already littered with used malaria test kits. “I’ve done 56 malaria tests so far this morning,” says Zondiwe. “Of these, 19 were positive. I do up to 300 tests every day, and around half of them are positive.” 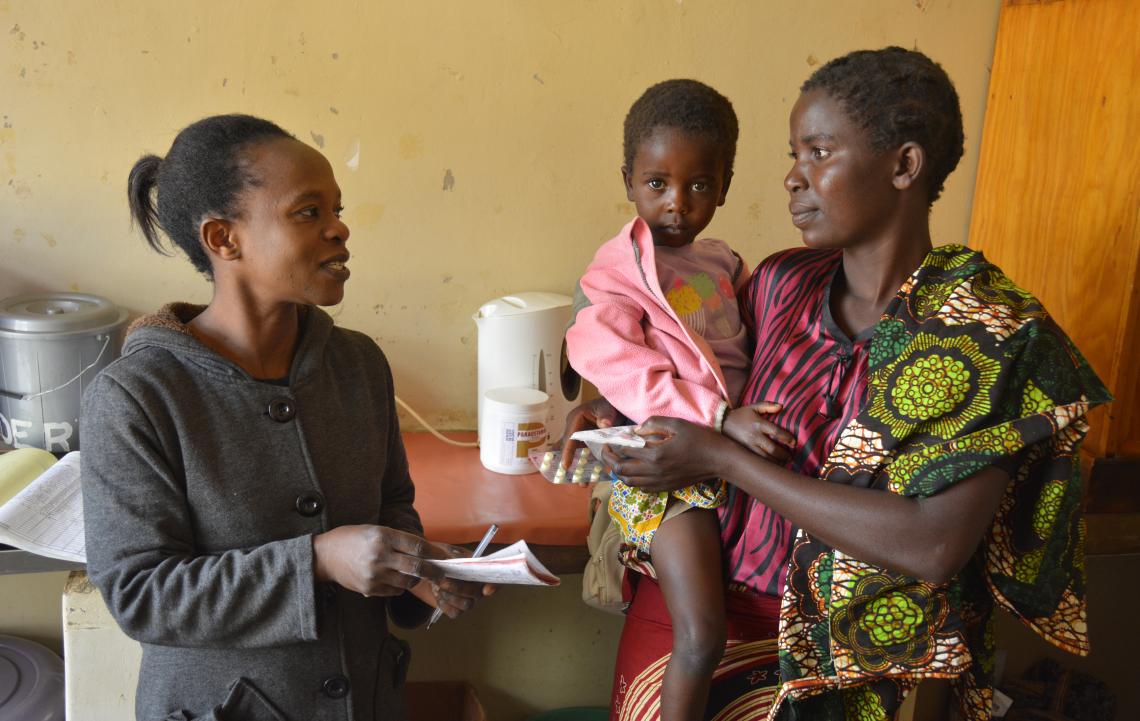 One of the children to receive a malaria diagnosis is four-year-old Esther Gama, who arrived with her mother Mary. After the test result, they receive three days’ worth of anti-malaria medication. “Esther is my only child,” she says. “She’s had malaria maybe six or seven times since she turned two years old. I’ve lost count.”

“Esther got sick three days ago,” Mary says. “I gave her pain killers but she didn’t get better. Then last night she got a fever, so I brought her to the hospital this morning.”

Mary’s calm exterior is somewhat deceptive. “I do worry about malaria a lot,” she admits. “Several children in our village have been admitted to hospital with serious cases. Some of them died.”

"I do up to 300 tests every day, and around half of them are positive."

Malaria is the number one cause of hospital admissions and deaths among children under five in the district. The fatalities are usually caused by people bringing their children to hospital too late.

“We lack resources such as blood supplies for transfusions,” says Liz Msowoya, the Kasunga District Medical Officer. “There is also a high HIV rate in this area so relatives cannot always donate blood. Sometimes the health workers donate their own blood because they don’t want the child to die. But other times there is nothing we can do.” 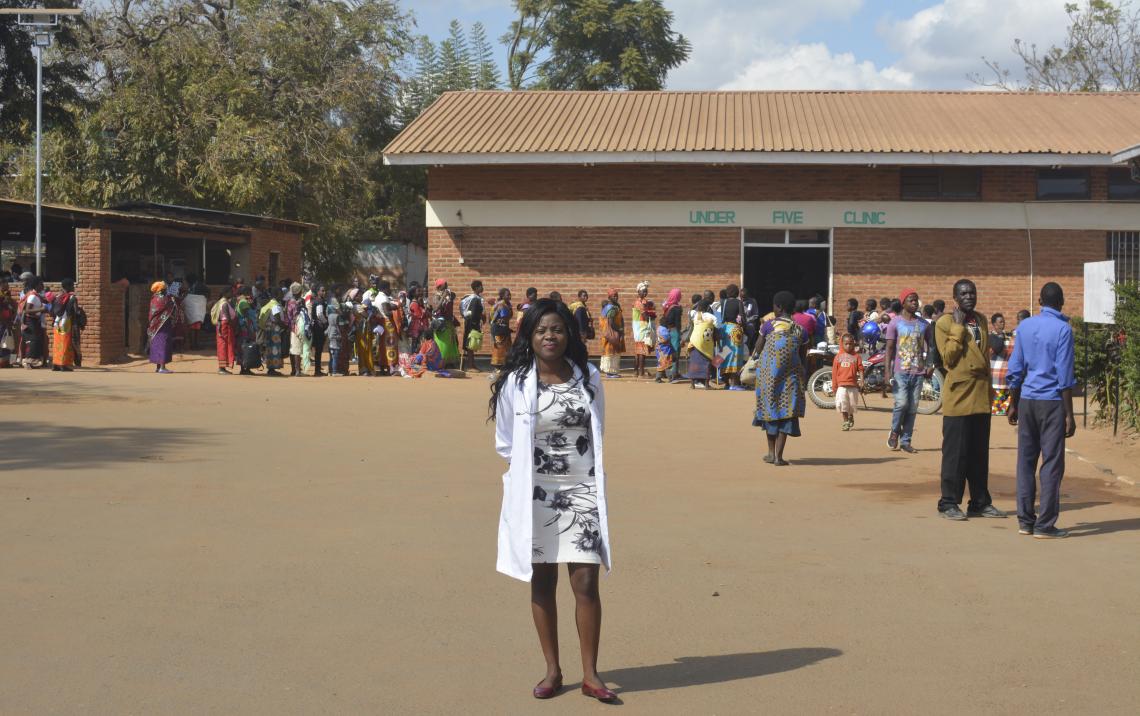 Chris Jones from the Malawi Liverpool Wellcome Trust Centre, who is co-leading the drone project with Michelle, says that existing anti-malaria measures like health surveillance assistants and mosquito nets have led to a dramatic decrease in deaths over the last two decades, but that to reduce this further, new tactics are needed.

“This is the first time the drones approach has been tried,” he says. “If we can prove the concept, this could become another malaria prevention measure to be used alongside bed nets and village health workers.”

The project made use of UNICEF Malawi’s Humanitarian Drone Testing Corridor. Launched in 2017 with the Government of Malawi, this allows universities, companies and individuals to conduct test flights within an 80 km diameter area centred on Kasungu airfield. Tests must have a humanitarian or development application in the areas of transport, imagery or connectivity, and provide training opportunities for local Malawians.

As well as securing permission to fly, UNICEF has conducted community sensitization activities in the corridor, so that local people know what drones are, and what they are doing.

Michelle says that her mosquito project would not have been possible without UNICEF’s drone corridor. “Our contacts are in the health sector, not civil aviation,” she explains. “It would have been very difficult for us to get permission to fly and conduct the community sensitization ourselves. With the drone corridor, however, we could just come in and fly straight away."