From self-driving tractors to farming robots, there’s no doubt that agriculture is in the middle of a high tech shakeup. But a new proposal from researchers in Saudi Arabia and the U.S. could take things to the next level — by using drones to carry out a futuristic version of crop dusting; only they’ll be dispersing tiny sensors in place of crop protection products. 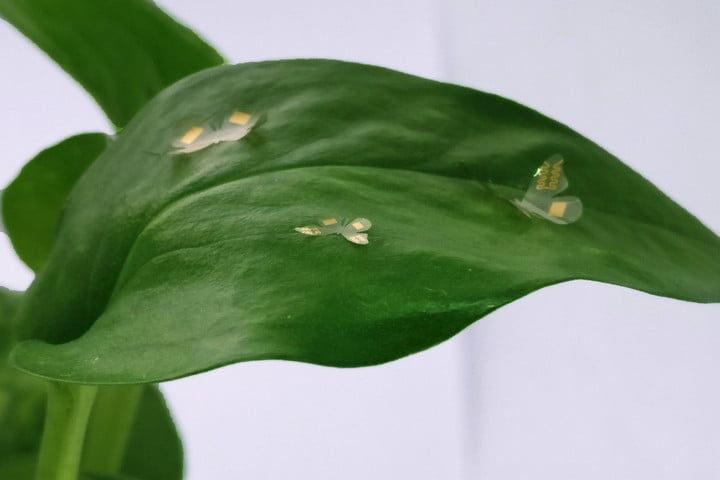 These 3D printed biodegradable sensors, called “PlantCopters,” are modeled after dandelion flower and maple seeds, which can float through the air in a manner similar to miniature helicopters. They will then get stuck on the leaves of crops, where they can keep track of plant growth, health, and surrounding microclimate. This data can then be transmitted via Bluetooth.

“Due to complexity and expense, [similar technology has previously been out of reach for many] farmers, especially in the developing countries where most of the farming takes place,” Muhammad Mustafa Hussain, a professor of electrical engineering at King Abdullah University of Science and Technology, told Digital Trends. “We are reducing both complexity and price to bring high tech to farming. This development, when widely deployed, will generate big data which can be used by artificial intelligence to make and use execute intelligent decisions using robotics. This is the first step toward that direction.”

At present, the work is still in its relatively early stages. Researchers on the project have created long-lasting, low-power sensors which they have shown can detect even tiny amounts of growth changes in plants and then transmit this data. They have also demonstrated that prototype PlantCopters can be successfully dropped from a height of 50 feet, although a mass airdrop has not yet been attempted.

However, the promise of such a project is immense. Alongside some of the other agricultural technologies we mentioned up top, this hints at a data-driven, autonomous future for farming. Not only will tools of this type give farmers more information about their crops, they could also hopefully free up some of their time, too.