Fertilize by drone, till by text: Making tech work for Africa's farmers

Daniel Asherow eyes a large white drone as it buzzes above his rows of pineapple plants, methodically spraying fertilizer into green stems that will soon produce juicy fruits for export. The drone hovers a few feet in the air, covering in 15 minutes the same ground that usually takes five workers an hour. 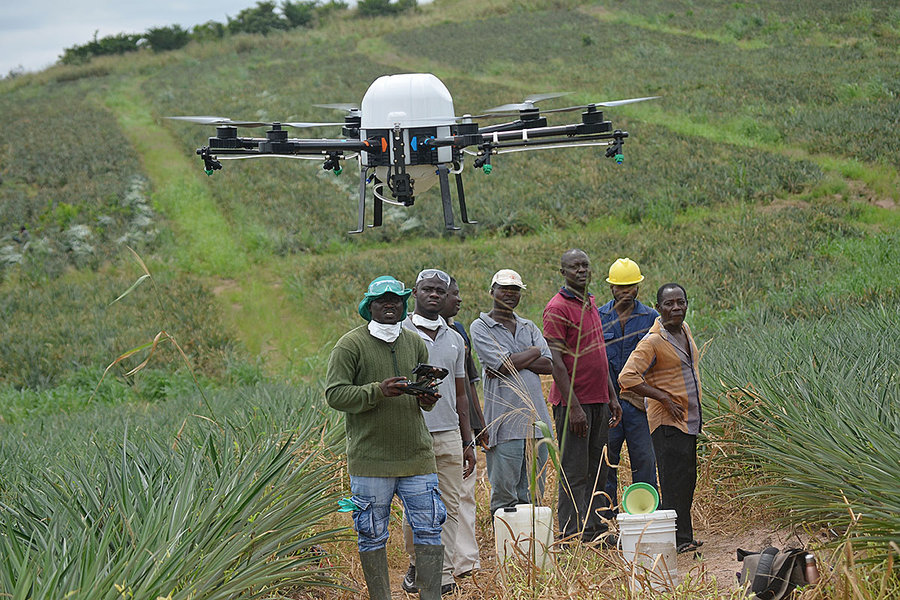 Around the world, agriculture is becoming ever-more mechanized: from robot-run farms in Japan, to artificial intelligence-tracked pigs in China, to strawberry-picking machines in the United States. Here in Ghana, in rolling plains of pineapples a few hours northeast of Accra, high-tech farming innovations are still in their early days. The potential long-term gains are especially crucial for sub-Saharan Africa – but also, the prospect of short-term farming job loss is especially severe.

Half of the continent depends on agriculture for all or part of their livelihood, according to the United Nations Agriculture in Africa 2013 report. And unlike in many other regions, that number isn’t waning: agriculture has absorbed half of all new entrants to Africa’s workforce over the past 30 years. By 2050, the continent’s population is expected to grow by more than 1 billion – people who need greater food security, but also jobs. Yet nations where mechanization becomes the norm have typically seen drastic drops in agricultural employment.

But a crop of entrepreneurs are pushing to re-envision sub-Saharan Africa’s agriculture, increasing mechanization in ways that not only increase productivity and incomes, but ultimately create better jobs: not hand-tilling the fields, but flying the drones. For that to work, financing, training, infrastructure, and supportive policies are needed across the continent, with solutions that target particular communities. Not everyone needs to own the equipment, they just need to have access to it: from portable mills, to shared tractors.

Today, Mr. Asherow is just trying out the drone. But it comes at a good time, he says, as he’s struggled to attract new workers lately. Unlike many African countries, Ghana has already seen a drop in farm-labor supply, as a result of urbanization. In the early 1990s, agriculture was 56 percent of Ghana’s total employment; today it is 40 percent. Young people who once would have looked for farm work are now heading to urban areas, he says, where they can find jobs like driving mototaxis. He hopes that drone jobs prompt young workers to take another look at farming.

Still, some workers’ fears about being replaced by technology are justified, he says. “Those who have been working on a farm for a long time without the requisite training, it will be difficult for them to be absorbed.”

He anticipates employees coming to him with concerns over their jobs being replaced by machines. But pineapple-growing still relies on “a lot of areas for manual work – the planting and initial jobs to get the plant established.”

Much of sub-Saharan Africa’s agriculture today focuses on low-tech labor, with little post-harvest processing; most crops are sold in their raw form to local markets, or exported. Farmers here have 10 times fewer mechanized tools per farm area than farmers in other developing regions, according to the African Development Bank Group. Better technology could spur more processing, distribution, and marketing, all of which could create more jobs, agricultural experts say. But it also stands to boost food security. Africa has the world’s highest share of food waste, due in large part to problems like cold storage. Crop loss has become a significant problem in the face of climate change.

As in many parts of the world, the rise of mechanization has spurred concerns about job losses. Sheryl Hendriks, a food security expert at the University of Pretoria, says those worries are rooted in “a fear of change, rather than facts.”

“If you release labor from a very tedious, drudgery-based part of the system, you have an opportunity to create jobs elsewhere,” she says.

Back on Asherow’s farm, pilot Valentine Klutse walks along the rows of the crops, mapping out coverage. He then mixes the fertilizer with water and pours it into a tank beneath the drones blades. With a few simple clicks on the controller, the drone is buzzing up in the air, releasing the treatment through nozzles.

The drone belongs to AcquahMeyer Aviation, the brainchild of Ghanaian entrepreneur Eric Acquah and his wife Tracey Meyer, the company's chief operating officer. While living in Germany, the duo used to see Ghanaian produce on the shelves at their local supermarkets. But they suddenly saw a drastic decrease, linked to the European Union’s 2015 two-year ban on five Ghanaian vegetables. Farmers were not sufficiently spraying their crops, an agronomist told them, which had led to infestations. Determined to see Ghanaian exports back in European supermarkets, they launched their company in 2017.

While they are still in their first year of business, demand is booming.

“It's something that the agriculture industry was waiting for. We came in at the right time with the right technology,” Mr. Acquah says.

“The manual sprayers will need five days; half the farm will be gone by the time you complete it,” Acquah adds. “When we come in with a two-acre farm we can spray it in 15 minutes and kill the insect before they kill the farm.”

While sprayers’ jobs might be lost due to the drones, higher yields could yield new positions in processing, transport, packaging, and selling. The company has plans of employing close to 2,000 people across Ghana. Drones are currently designed and made in Germany, but Acquah wants to build a factory in Ghana to assemble them.

“It's more of removing the tedious nature of work and bringing in more people to enter into the business so it's not taking away jobs, it's creating more jobs,” says chief executive Kamal Yakub, who adds he has trained or employed around 250 people in Ghana to operate the tractors.

This year, with funding from the NGO Alliance for a Green Revolution in Africa, they have focused on Ghana’s Upper West Region, a poor area along the northern border with Burkina Faso. He noticed the service could be a game-changer for women in particular, who run their households while farming with a simple cutlass and hoe. For about $50, women could plow a two-acre farm with a tractor, saving around a week’s labor.

It seemed like the first time many of them had been offered access to a tractor, he says, and suggests patriarchal beliefs were at play. But when someone requests a tractor via text message, you “don't know who is there – it’s first come, first served.”

The company has an ultimate aim, Mr. Yakub says with a grin. “We are going to put the cutlass and hoe in the museum so that our children will come 20 years and say, ‘What's the use of this?’ ”