Seed-slinging drones can save tropical forests


Mangrove forests used to stretch in an almost uninterrupted arc around the Bay of Bengal, from Bangladesh in the north to Thailand in the south, forming a natural line of defence against cyclones that batter the coast every few years. Over the past few decades they have been stripped away to be turned into charcoal, or to make space for shrimp farms, rice fields and tourist resorts. In Myanmar alone, a million hectares of mangroves have been lost since 1980.

The loss of the forest has left the country exposed to extreme weather. In 2008, Cyclone Nargis made landfall in Ayeyarwady, sending storm surges 40km up the river’s delta. More than 138,000 people died.

In order to keep global warming from reaching 2°C above pre-industrial levels – a threshold level to avoid catastrophic and irreversible climate change – would require a 25 per cent net reduction of man-made carbon emissions by 2030, and net zero emissions by 2070. Planting trees is one of the most effective way, forests already remove a quarter of all the carbon dioxide that humans emit into the atmosphere.

For the past four monsoon seasons, the Myanmar govenment has been overseeing an attempt to rebuild the barrier. It is dirty, difficult work, and slow. People from local communities are employed to plant seedlings by hand, crouching in the sucking mud for hours at a time. Since 2015, they have planted five million trees, covering just over 2,000 hectares of land. 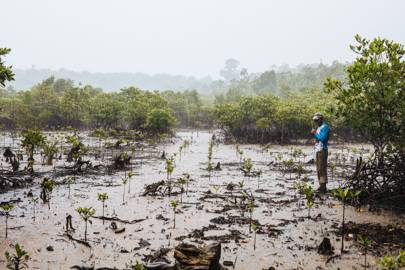 It's back-breaking work, and progress can be slow. However, over the past 18 months a more radical solution has been trialled. Drones have been flying sorties over the devastated mangroves.

This seeding drone making high-resolution SK.AI maps of the terrain, feeding the data back into an algorithm that can analyse the topology, slope, soil type and moisture to determine the optimum position of each seed; and collecting granular information about the seedlings as they grow.

Working at full capacity, this drone seeding spray machine, flying in six-strong autonomous swarms, can plant 400,000 trees in a day,