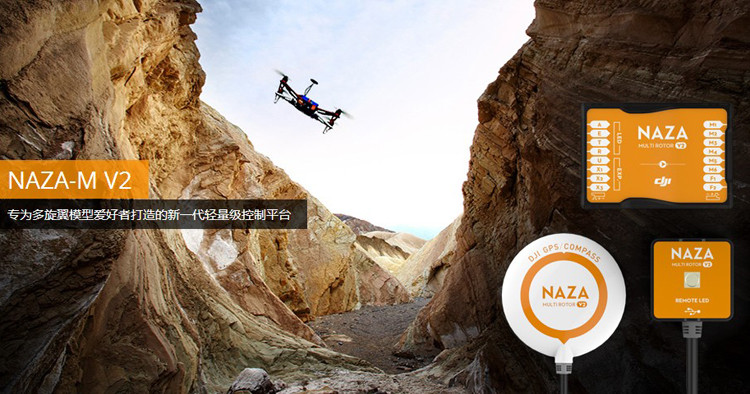 is a new generation of lightweight DJI multi-rotor control platform. It is different from WooKoog-M's application of heavy load and professional aerial photography. While inheriting the excellent flight stability of DJI products, it provides excellent feel and maneuverability. For DIY enthusiasts, the Naza series are relatively cheap and cost-effective.

When using home lock, the forward flight direction is the direction from home point to the aircraft.

When the control distance between the aircraft and the remote controller is too far or the connection is lost due to signal interference, the system will trigger the runaway protection function. When the GPS signal is good, the automatic return home safe landing function will be triggered automatically. In addition, the function of automatic return to home triggered by the remote control switch is newly added, without entering the fail-safe mode.


The above are the characteristics and introduction of the Naza-m series flight controller.

airplane autopilot is an advanced autopilot for academic and commercial integrators. Designed by CUAV in collaboration with the PX4 team. Based on the Pixhawk  FMU v5 open hardware design, a highly modular board using Pixhawk standard pinouts for its external interface, allowing for carrier board integration. Out of the box pre-installed with PX4 Open Source Autopilot, and fully supported by ArduPilot.

An autopilot is a system used to control the trajectory of an aircraft without constant ‘hands-on’ control by a human operator being required. Autopilots do not replace human operators, but instead they assist them in controlling the aircraft. This allows them to focus on broader aspects of operations such as monitoring the trajectory, weather and systems.[1] The autopilot is often used in conjunction with the autothrottle, when present, which is the analogous system controlling the power delivered by the engines.