Helicopter spraying is dangerous,drones will replace It 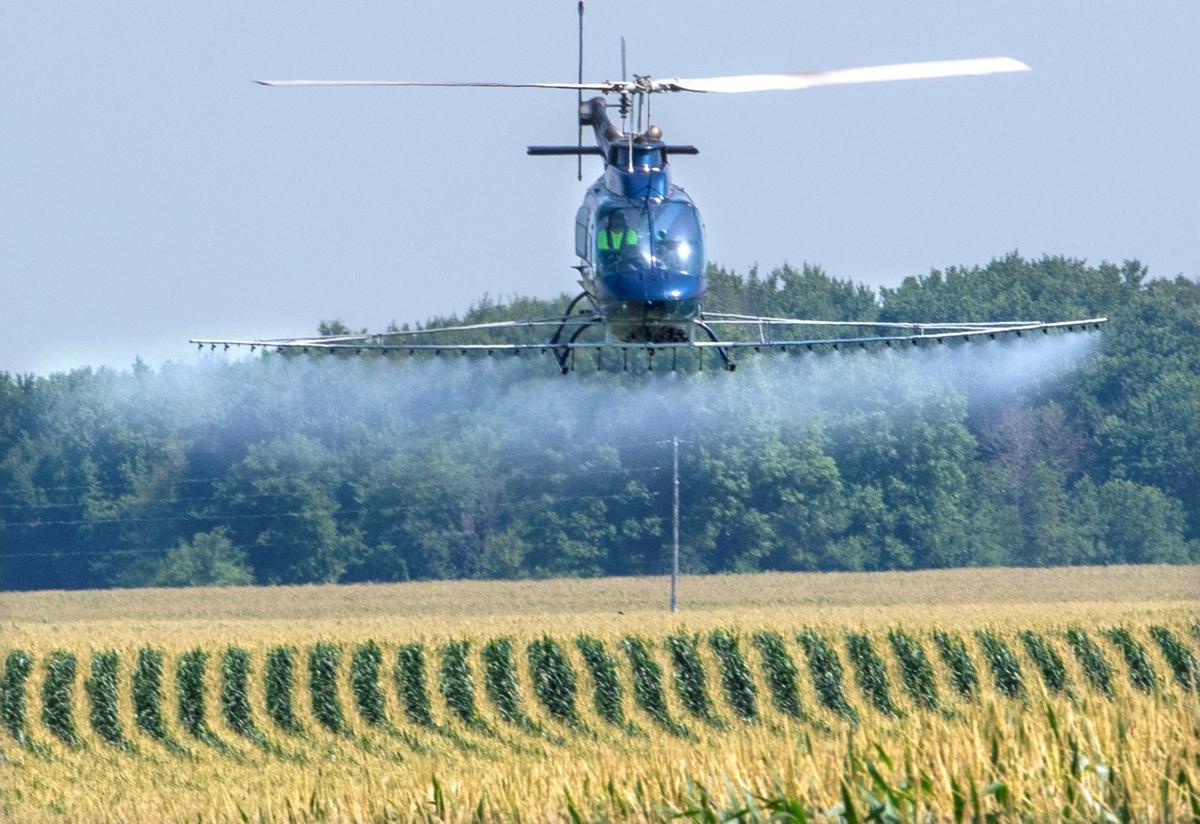 CHAMPAIGN — With hot, rainy weather this spring, fungi have had an ideal environment to grow in.

"We'll sit in these things 12, 14 hours a day, and it's exhausting," said Pagel, co-owner of Helicopter Services of Illinois in Fisher. "It's fun flying them ... but after the first hour of the season, I'm over it. It's a job."

HSI, founded in 2011, has three helicopters, which are followed around with a semitrailer truck and a pickup truck with a gooseneck trailer.

"We take off from the top of our semis," Pagel said. The trucks "can't keep up with us, so there's two vehicles per helicopter."

Between the three pilots, they can cover some 7,000 acres a day, Pagel said.

HSI sprays farms from Mattoon to Melvin to Terre Haute, Ind. It's in the middle of the busy season, which lasts about three weeks.

Farmers don't always apply fungicide. It depends on a variety of factors, such as how prevalent the fungi are and how resistant their particular crops are to them.

"Some guys are spraying, some are not," said Lin Warfel, who farms near Tolono. "It does increase yields pretty consistently, but it doesn't always increase them enough to pay for it."

He decided not to spray his fields.

"I'm not spraying any right now. I was checking fields this morning and decided, since it's cooler and the humidity was lower, I'm not going to spray," Warfel said Monday. "That's partly because the varieties of corn that I have are fairly resistant."

If farmers decide to spray, they can call a company like HSI directly or go through a farmers' co-op.

"Farmers do reach out directly to us," Pagel said. "We also go through some co-ops."

About 87 percent of the aircraft used to crop dust are planes, according to the National Agricultural Aviation Association, but Pagel said helicopters are becoming more common and that his business is growing rapidly.

"Planes do as good a job as us overall in most of the fields, but when it comes to these tight, little fields, we can get in the corners," he said.

While spraying with helicopters tends to be more expensive than with planes, Pagel said farmers can be more involved.

"They can fill the chemical right on site and be right there to manage it and watch everything," he said. "A lot of our customers even provide the product. They bring it to us, so they know what's in their mix, how it was mixed, and we just applicate it for them."

Crop dusting, either by plane or helicopter, can be dangerous.

"They're tricky machines. It takes a lot to be a pilot," Pagel said. "The helicopter has to be almost second nature because now you're adding farming to the mix. It's a little more difficult than just flying a helicopter. You're putting yourself in a very dangerous environment inside the wires, the trees, the buildings."

HSI's pilots can practice as much as they want before the season starts with water instead of fungicide, Pagel said.

"I've been doing it for eight years, and I'll warm up myself with water, just to minimize risk," he said.

They'll also circle a field before spraying to look for power lines and other obstacles, and if they don't see any, they'll circle again.

Asked if drones will ever take over his job, Pagel said it will take a while.

"I think that it will be a thing in the future," he added. "I'm not sure if I'll jump on the bandwagon yet or retire when that day comes."