Leon Solent, UK, Tuesday, May 12, 2020. This "Wingracers ULTRA" drone is parked on the runway of Solent Airport. The UK is testing a car-sized drone to deliver medical supplies to hospitals faster and help ease the pressure on the UK health system during the coronavirus crisis. 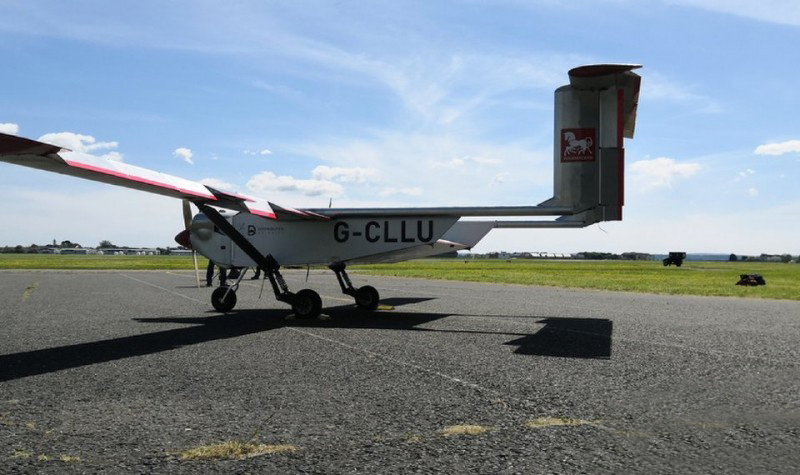 The first such delivery was completed on Saturday, when a large fixed-wing drone flew into the sky from an airport on the south coast of England. Ten minutes later, it landed at an airport on the Isle of Wight, 12 kilometers (7.5 miles) away, and the pathology samples loaded were then taken to the local hospital.

Due to the coronavirus pandemic, the pilot project has accelerated. As the authorities tried to isolate people to limit infection, many travel and transportation vehicles around the world were effectively closed. The department responsible for the drone project said that air transportation can reduce the cost and transportation time of important medical supplies, especially during a health crisis such as the COVID-19 pandemic. These drugs are expected to be used only in a few cases that are particularly difficult to reach the hospital.

James Scanlan, a professor of aerospace design at the University of Southampton, said: "The logistics links in many parts of the UK are very weak, and this aircraft is a solution." Scanlan is working with Cooperation on this project. "It carries a very heavy load, and we are actually an island country-we have many small communities where such things can connect people cheaply and effectively."

For example, on the Isle of Wight, medical supplies, including important items such as blood and drugs, are currently transported by passenger or cargo ferry, which takes about an hour, or transported by traditional manned aircraft, which is expensive. In order to prevent the spread of the new coronavirus, the number of crossings has been reduced recently. "This is a step forward, in fact, it provides a faster delivery speed," said Conrad Haig from Solent Transportation, the project is running. "There are some (national health) services that need to be provided in a very timely manner, some of which will be promoted in a better way."

simpleplanes vtol UAV platform is an electric long-haul composite wing vertical take-off and landing drone independently developed by our company. The overall layout of the composite wing with fixed wing and four-rotor is used to solve the vertical take-off and landing of the fixed-wing UAV in a simple and reliable way. The difficulty of the fixed-wing UAV has the characteristics of long flight time, high speed, long distance and the vertical take-off and landing of the rotorless drone. The vertical take-off and landing mode greatly enhances the environmental adaptability of the drone platform. The man-machine platform can operate smoothly in complex terrain and densely populated areas such as mountains, hills and jungles, greatly expanding the scope of application of drones, and is an ideal choice for industrial-grade drones.
The FD50P UAV platform is equipped with industrial-grade vertical take-off and landing fixed-wing flight control and navigation system, as well as professional aerial aerial survey and inspection ground station software. It can ensure that the drone can fly autonomously throughout the process, without operator intervention to complete the autonomous take-off and flight status. In the flight phase of conversion, autonomous cruise, and autonomous landing, it also supports automatic route planning for 1000 waypoints and emergency standby plan for 100 waypoints.
The drone platform has the following features and advantages:
a) Practical and efficient: it has the characteristics of fixed-wing UAV’s long flight time, fast speed, long distance and large load;
b) Vertical take-off and landing: with the take-off and landing mode of the rotorless drone, greatly reducing the requirements for landing and landing and airspace;
c) low cost of use: no complicated and bulky launching and recycling equipment, no additional recycling sensors required;
d) Simple operation: integrated special flight control and navigation system, full autonomous flight, operators only need to send flight plans, no professional training and operational experience;
e) Compact system: no complicated auxiliary equipment, simple transportation, deployment, maintenance and withdrawal.