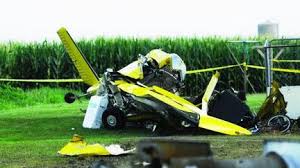 
The Sutter County Sheriff’s Office confirmed that Burton A. Haughey, 58, of Wheatland, and Brian J. VanDyke, 62, of Rio Oso, died in the collision over the 3700 block of Striplin Road just before noon. The pilots were flying Grumman G-164C Ag Cats — popular crop duster planes, the Federal Aviation Administration said in a statement.

“Law enforcement is reporting to us that two single-engine Grumman G-164C Ag Cats collided in midair under unknown circumstances over Striplin, California, around noon,” FAA spokesman Ian Gregor said in a statement. “One pilot was reportedly on board each aircraft.”


The FAA and National Transportation Safety Board will investigate the matte.

If use drone sprayer I think this tragedy isn't happen, there are many crop duster for sale，if you are want do this business, visit us .