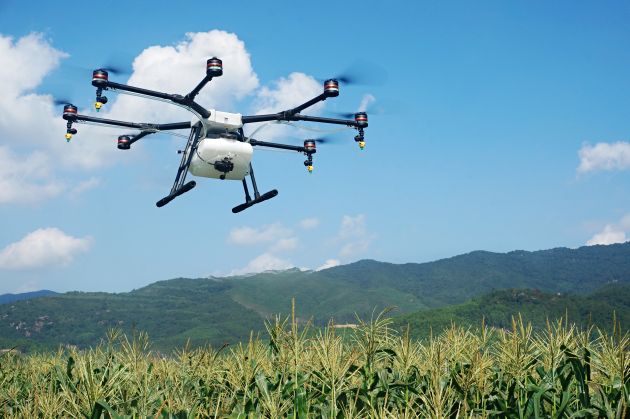 
“Agras MG-1” is a drone for pesticide spraying with 8 rotor blades that can be folded compactly. It can carry 10kg of pesticide and sprays it while flying at a maximum speed of 8 meters per second. Even if the speed changes during the flight, the momentum of spraying the pesticide is automatically adjusted, preventing the situation where it cannot be sprayed well due to wind pressure.

It is equipped with DJI's original flight control system and microwave radar, and has the smart function of flying while scanning the terrain finely to centimeters. This function allows you to fly and evenly spread pesticides while keeping the distance from the crops constant. It is also equipped with an “intelligent memory” function that re-spreads pesticide spraying by flying again to the last recorded location when spraying is stopped for replenishment of loaded pesticides or battery charging. In addition, the system "DJI Lightbridge 2" that can communicate with the product and a dedicated remote control over a long distance in real time is built in. In addition to operating the product manually with a dedicated remote control, you can also check flight information such as battery level and flight altitude on the panel installed on the remote control. If it is also released in Japan, it will be possible to reduce the burden on farmers with few hands. Early domestic release is expected.