The United States is one of the most developed countries in agricultural technology in the world. A farmer can cultivate 80ha of land to feed 200 people. However, as the average age of American farmers rises to 57.5 years old, the aging of the agricultural population is the main factor hindering the development of American agriculture. The advent of farming drone technology could help U.S. agriculture alleviate labor shortages. , which enables farms to increase crop yields while reducing pesticide use. also the farming drone price is more cheaper than the traditional farm equipment


According to research by the American Farm Bureau Federation, U.S. farmers using agricultural drones are seeing an average return on investment of $12 per acre for corn and $2 to $3 per acre for soybeans and wheat.

Even small family farms, which make up 90 percent of all farms in the U.S., are contracting with service providers to deploy drones for aerial mapping and crop spraying with fertilizers and pesticides.

While many farms still use traditional tractors or crop dusters to spray crops with fertilizers and pesticides, these traditional crop equipment is gradually being replaced by drones. Unmanned systems allow farmers to pinpoint specific areas in need of nutrients or pest control.

Arthur Erickson, CEO and co-founder of Richmond, Texas-based Hylio, says a tractor or crop duster uses a comprehensive approach to spray pesticides over an entire field when only a portion of the crop may be at this time. Chemicals are required to control weeds. Agricultural drones.

"What a tractor can't do is field handling," Erickson said. "Once the crop starts growing and there are signs of a fungal outbreak or some kind of weed outbreak in different areas of the field, you can't go out and isolate those spots and spray them.

This indiscriminate practice not only causes farmers to overspray, but also poses health and environmental risks through pesticide drift and the movement of pesticide dust or droplets through the air.

"Pesticides can flow into creeks and affect other biological tissues," Watson said. "With a spot spray, you're just spraying that single spot or area. You have more control over where the chemicals go."

Hylio's farming drone reduce the environmental spillage of pesticides because they allow farmers to target specific crop areas that need to be treated. Each of the company's three drones is equipped with a high-definition video stream, radar sensors that allow them to detect and avoid obstacles, and a GPS module that enables normal positioning and RTK positioning. 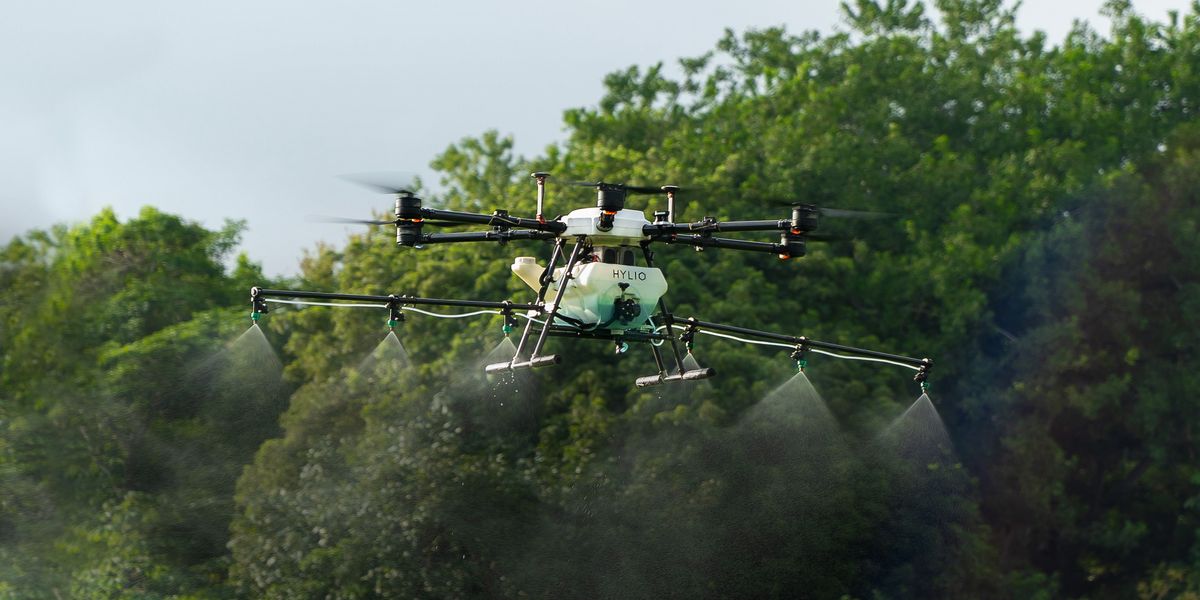 The Hylio's farming drone price starts at $19,300 and is delivered to the farmer fully tested and assembled. The package includes four pairs of 30,000 mAh 22V LiPo batteries, charging equipment, one handheld GPS tracker unit and access to the Hylio AgroSol Mission Control Software.