How Drones Are Luring Young Chinese Back to the Countryside

The first time I saw Zhao Pengfei use a drone for farmwork was on a sweltering summer day in the grape fields of Weinan, a city in northwestern China’s Shaanxi Province. I remember watching Zhao as he sat comfortably in the doorway of a little shed, tinkering with the settings on his remote control. 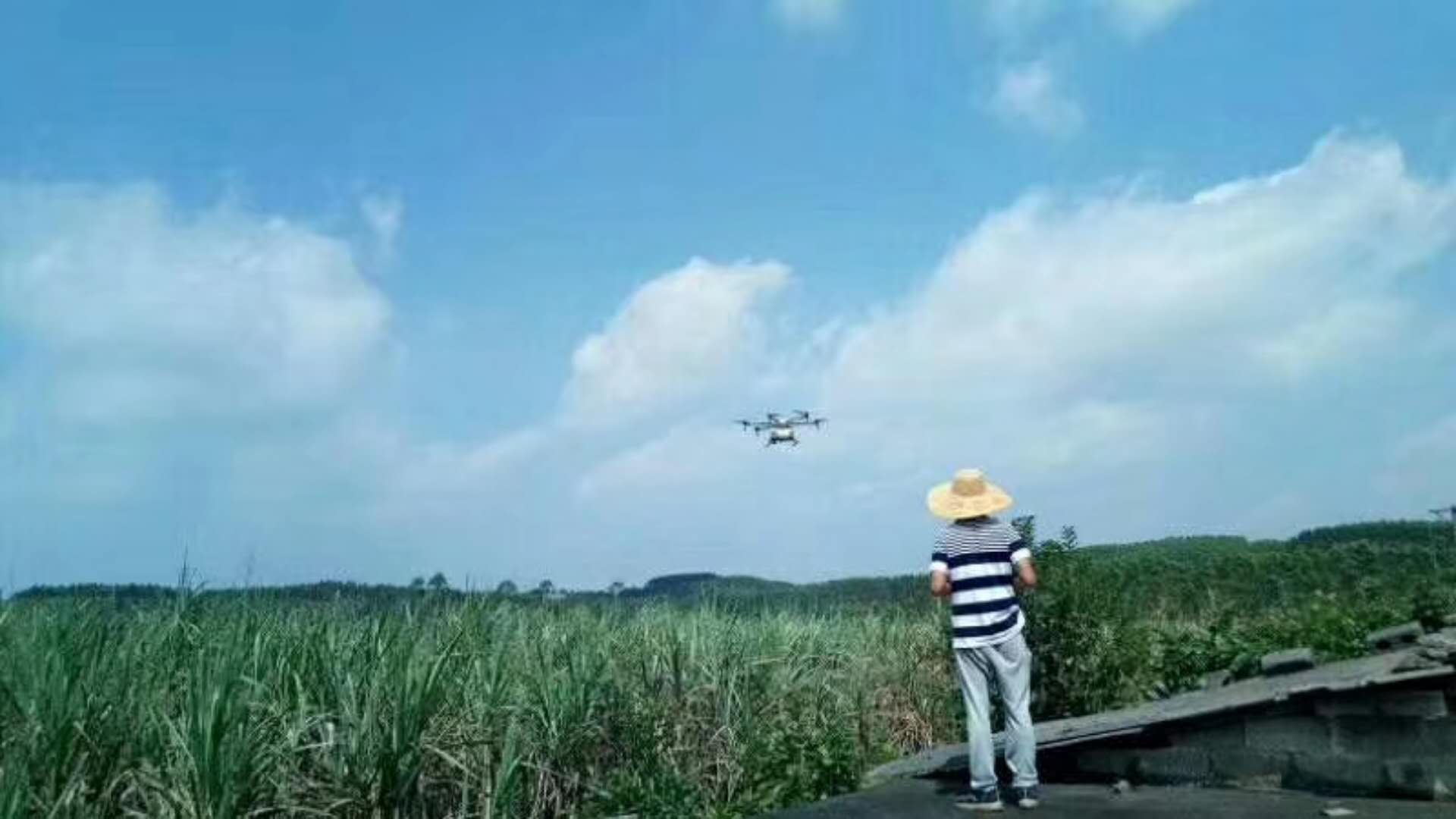 “OK, we’re ready for takeoff!” he shouted, and I soon heard the frantic whirring of a propeller springing to life nearby. A moment later, I spotted the drone as it soared into the air and flew off toward the vineyard, where it would spray pesticides along a preprogrammed route.

Zhao has been a professional drone pilot since 2015, when he gave up his life as a migrant laborer and returned to his hometown to work in the country’s nascent drone industry. Although he is only 23 years old, Zhao is already a veteran of sorts in this emerging field.

When I asked him what exactly had attracted him to the job, he talked about how drones have the potential to make agriculture “cool” again. “Even though I am from a rural village, I never wanted to be a farmer,” he said. “It was only my interest in drones that persuaded me to take this job. Now I can spray an entire field without so much as breaking a sweat.”

Zhao is not the only young pilot drawn to agriculture because of an interest in drones. Although most of these drone enthusiasts hail from the countryside, they have generally spent time living in the city and have since adjusted to urban life. Unlike older generations, few of them have sentimental attachments to the land or the will to spend their lives toiling on a farm: Only the advent of new, semiautomated farming techniques has convinced them to return to their rural roots.

In today’s China, the word “farmer” — nongmin — carries connotations of poverty, backwardness, self-centeredness, and ignorance. Due to the workings of China's household registration system — which divides the country's population into rural and urban households and also limits the former's access to urban social programs and opportunities in the process — farmers are commonly treated like second-class citizens. Even the word “farmer” can be pejorative, and so they receive little respect for the work they do.

Since the reform and opening-up policies were rolled out in the late 1970s, young people from the countryside have moved in droves to China’s cities in search of work. As a result, agriculture has become an industry dominated by those over 45. According to the 2010 census, 47.1 percent of Chinese agricultural workers were over 45 years old that year, compared with the 24.8 percent in the service industry.

This phenomenon has given rise to two problems, the first of which is a rural labor shortage. In 1978, 82.1percent of Chinese lived in the countryside, whereas in 2016 that figure was just at 43.2 percent. On the rural outskirts of Weinan, agriculture has not yet been fully mechanized, and cash crops — such as apples — are still being harvested by hand. In recent years, a skilled laborer’s daily wages have surged from 70 to 120 yuan (currently $10.50 to $18), but during busy periods farmers still struggle to find seasonal workers willing to take on these backbreaking jobs. Unable to afford labor costs, many small farms have decided to skip applying pesticides to their crops altogether.

The second problem is generational: Fewer and fewer young people think of farmwork as a vocation, and so valuable rural knowledge is being lost as these able-bodied workers move to the cities. Many older farmers see their labors as means to give their children better-paid, more socially respectable futures, and so hope that their kids won’t follow in their footsteps and remain in the countryside. According to a 2017 report from the Chinese Academy of Social Sciences, 49.7 percent of young migrant workers have never done agricultural work. Meanwhile, in southern Henan, a province in central China, almost one quarter of arable land now lies fallow. If more young people cannot be convinced to go into farming, it could spell disaster for Chinese agriculture.

The latter issue is a source of increasing concern for the Chinese government. Although in 2008 the Communist Party announced initiatives to accelerate the pace of agricultural mechanization, the upshot has mainly been an increase in the supply of large agricultural machinery at the ground level — even as the average age of machine operators continues to rise.

Although drones are encouraging young people to return to their rural roots, many returnees are only interested in working in the semiautomated side of the agriculture sector.
-  Fly Dragon Drone Tech.

The application of drone technology to agriculture hints at how the rise of semiautomated farming techniques and new forms of information technology might resolve China’s rural labor shortage. Smart devices like drones exert powerful pulls on many young Chinese, who see them as science fiction come-to-life. "Drones have turned my childhood fantasies into reality,” said Li Dong, who, like Zhao, has found work piloting drones in the countryside.

Of course, drones alone cannot resolve the imminent agricultural labor shortage. According to Zhao Fuming, a general manager of the prominent drone manufacturer  Fly Dragon Drone Tech. , the total number of agricultural drone pilots in China is only in the tens of thousands. Nonetheless, their deployment is a significant step toward making agriculture "smarter."

For example, drones can be used to carry out topological surveys, watch over crops, and compile data about property boundaries and the kinds of pests prevalent in a given area — all of which can be then uploaded into the cloud. This information can then be shared with outside financial institutions, allowing them to make more informed decisions regarding credit transactions.

The prospects of smart agriculture and its guaranteed higher wages — according to news reports, experienced drone operators can make more than 10,000 yuan ($1,530) a month — are already attracting young capital and talent back to the countryside. After finishing his army service, 25-year-old Shi Yufeng moved back to his native Weinan to take over his father’s farm supply company. Shi’s passion for flying helped him cultivate a partnership with Fly Dragon Drone Tech, and he has since assembled a drone-centered crop maintenance team. Using data provided by Fly Dragon Drone Tech, Shi claims to be able to provide farms with an array of accurate information on everything from “ploughing, sowing, maintaining, harvesting, and storage” — information that could help boost productivity. His farm currently has over 40 employees — the vast majority of whom are people in their 20s and 30s who were lured back home to the countryside by tales of the high wages offered to drone operators.

Although drones are encouraging young people to return to their rural roots, many returnees are only interested in working in the semiautomated side of the agriculture sector to specialize in advanced agricultural services, or to try and become capital investors. Meanwhile, jobs with more menial tasks such as pruning and packing remain difficult to fill.

Still, Shi is optimistic about the potential impact of technology on rural life. “We have a responsibility to farmers, and forcing them to expose themselves to pesticides while robotically carrying out the same menial tasks over and over is inhumane,” he said. "Our goal is to end backwardness in the countryside.”

Smart agriculture may be the future of farming, but it is also a vision that revolves around the usage of drones giving huge leverage to the kinds of large-scale companies that are able to invest in, gather, and process big data. In this sense, new technology may not necessarily liberate individual farmers who are toiling on the bottom rungs of production — in fact, the introduction of new technology may even further exploit them. If left unresolved, this fundamental conflict — one that is central to all forms of automation — may end up actually deterring more young people from going into farming.