The Whanganui couple has set up Agdrone Ltd, seeing an opportunity to provide agricultural spraying services in areas where helicopters cannot fly.

During a visit to the Fieldays at Mystery Creek last year the Funnells saw a drone designed to spray weeds and thought it would be a good part-time venture.

They watched videos on YouTube of drones spraying rice paddies in Asia and in August went to a demonstration at Kinloch, Taupo. They then bought a
new drone.

"It was cutting edge technology when we bought it but it'll be an antique in two years," Warrick said.

With the drone purchased, Warrick had to learn how to fly it and get his licence to operate it commercially.

In August he spent three days in Tauranga at a flying school where he learned theory and law about flying drones. A three-day agricultural chemical rating course in Auckland followed then a flight test with an approved person.

Warrick had to submit an exposition (standard operating procedure) to the Civil Aviation Authority (CAA) and, having no idea what was required, contracted Aviation Safety Management Systems (ASMS) in Feilding to produce the 138 page document which was submitted to CAA in October.

"The concept of a UAV [unmanned aerial vehicle] in agriculture is a pioneering thing. There's no written training syllabus for people like me. There is very little present-day New Zealand agricultural drone spraying experience to call on. Rice paddies are not situated on the side of hills that grow gorse."

ASMS wrote the syllabus then Warrick had to go through his drone flying and agricultural spraying paces with an approved instructor. He then had an extensive interview with CAA to complete his qualification under CAA's Rule 102 which relates to safety of unmanned aircraft systems. 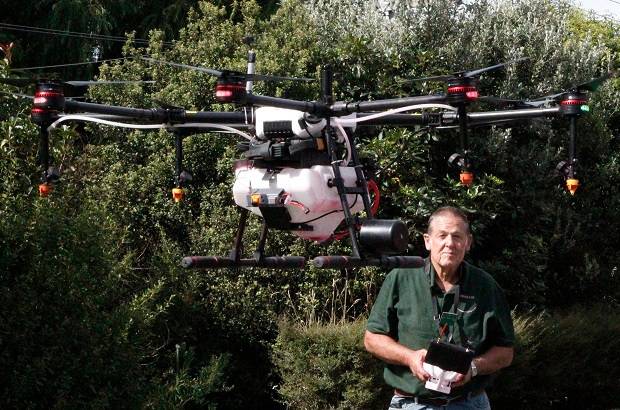 The Funnells' DJI AGRAS MS-1 drone carries 10 litres of water but there are drones that carry up to 30 litres.

Warrick programs in the work area and the drone flies within those specifications. However, in some cases, such as on hillsides, the drone needs to be operated manually.

"Most of the time I'm spraying scatter stuff. If it's dense, a big helicopter is more efficient.

"With scattered gorse, it can take 30 minutes to use 10 litres of water but if I'm solid spraying I've got rid of the lot in nine minutes. I can turn the spray off in between plants so it's not wrecking too much pasture or using more chemical than I need."

The drone's 3kg battery lasts 12-15 minutes, depending on the type of work the drone is doing, which means the batteries need to be changed regularly during jobs.

Spraying can only be done in line of sight and Warrick has to have an observer with him on jobs, with older brother Barry currently undertaking that role and doing the frequent battery changes.

Other services include spraying moss on roofs and whitewashing horticultural glasshouses to reduce ultraviolet penetration. Warrick is keen to explore the possibility of forestry spraying in future, using the drone for work currently done on foot.