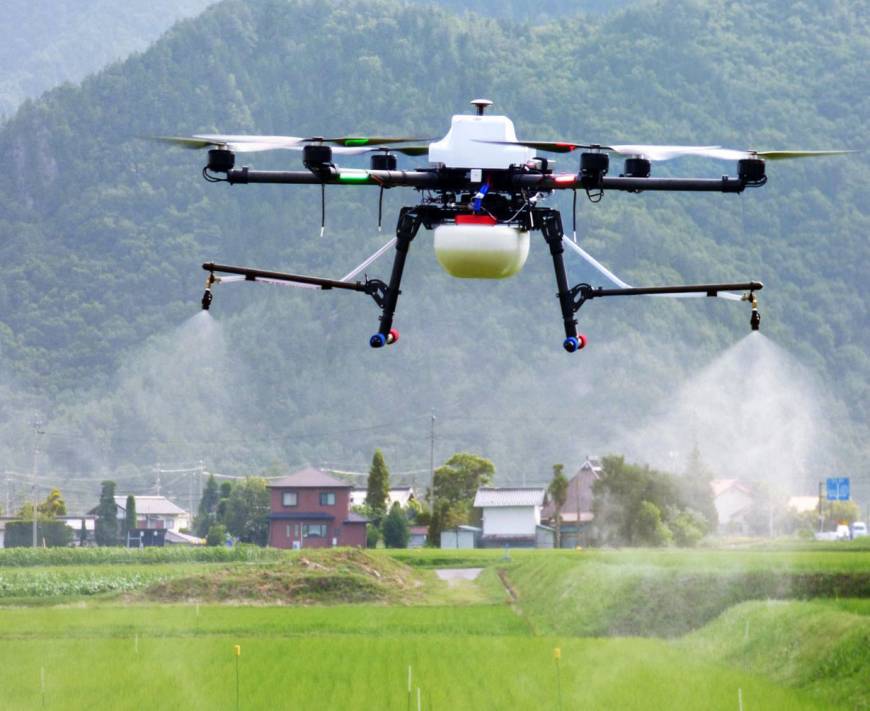 Drones are finding increasing use in Japanese agriculture as farmers start to use the unmanned aerial vehicles for crop inspection and other purposes.

Drones “are effective in promoting data-based agriculture and reducing agricultural work” at a time when many aged farmers are struggling to find successors, says an official at the farm ministry’s Technology Policy Office.

In Japan, it is necessary for unmanned helicopters that spray pesticide, fertilizer or seeds to be registered with a special organization.

Registration became necessary for drones in 2015. As of January, 673 drones had been registered, up about three times since last March.

Pesticide drones use 8- to 10-liter tanks. One hectare of rice paddies requires about 10 liters of pesticide. While it usually takes hours for a farmer to treat a hectare of paddies, a drone can do the job in about 10 minutes.

Unlike conventional unmanned agricultural helicopters, drones can make sharp turns and do not generate strong winds, which can damage leafy vegetables. They also cost around ¥2 million, which is far more affordable than unmanned helicopters.

Video cameras on the drones can be used to check the progress of crops. Computer analysis of the images can tell farmers where growth is slow and provide other valuable information.

Based on such analyses, farmers can change the amounts of fertilizer or make other adjustments to improve quality and shore up yields.

Researchers are also trying to establish a method to use drones effectively to reduce damage caused by birds and animals. This is done by flyig drones at night, when deer and boars are active. The UAVs capture images on the ground using special cameras, and the data help researchers find ways to catch them.

Drones are also proving useful in examining damage to irrigation channels and other farm facilities caused by typhoons and other natural disasters.