Drones can deliver food in Shanghai in 2022 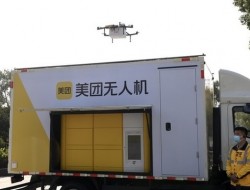 News on January 28, according to a report from Dongfang.com, the Jinshan District government and Meituan jointly announced that China’s first urban low-altitude logistics operation demonstration center has officially settled in Shanghai. It is expected that the normalization of real user scenarios will be opened in Jinshan District, Shanghai in the first half of next year. Trial operation of delivery routes will allow Shanghai residents to experience the convenience brought by drone delivery food.


According to reports, the drone delivery capacity has been connected to the Meituan Takeaway App to provide delivery food services in collaboration with riders. Users can see the delivery path of the drone capacity after placing an order for the drone to deliver meals. As of June this year, Meituan UAVs have also completed more than 200,000 flight tests, with a running time of more than 600,000 minutes.

– Built-in antenna shields from dust and moist.
– Self-locking propellers .
– Under circumstances when Drone is in low voltage status or loss of signal, Return to Launch failsafe will be automatically triggered to save the drone.
– Plan the flight path that can be saved for future mission on either Herelink 5.5″ inch touch screen or on MissionPlanner/PC after linking herelink with PC through WiFi / Bluetooth/USB, drone flying becomes programmable and as simple as anyone can master. Alternatively, Herelink also serves as a streaming media server that delivers video and data (WAN) among team members on their devices like an ipad, mobile phone or PC, allowing a simultaneous team participation in the mission.
Specification Version: Quadcopter Battery-powered Version