The most expensive quadcopter in the world 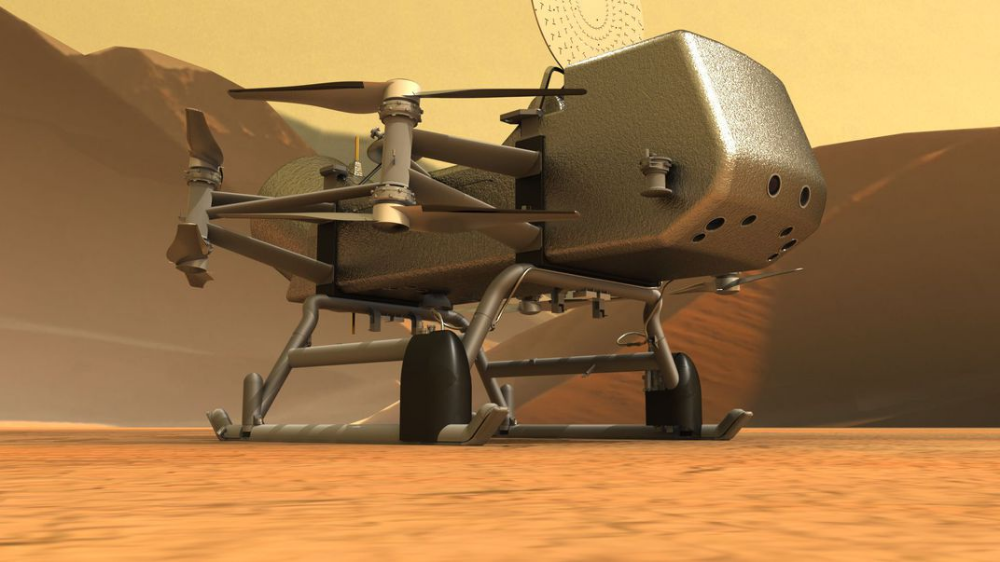 NASA’s next billion-dollar mission, called Dragonfly, will be an innovative quadcopter to explore Titan, Saturn’s largest moon, the agency announced today. The craft will soar and hover over the icy moon’s surface—and land on it—in a search for the conditions and chemistry that could foster life.


The mission—led by Elizabeth “Zibi” Turtle, a planetary scientist at the Johns Hopkins University Applied Physics Laboratory (APL) in Laurel, Maryland, and also managed by APL—will launch in 2026.

Titan is veiled by a nitrogen atmosphere and larger than Mercury. It is thought to harbor a liquid ocean beneath its frozen crust of water ice. NASA’s Cassini spacecraft studied Titan during its historic campaign, and, in 2005, dropped the short-lived Huygens probe into Titan’s atmosphere.

Many scientists believe, could have resulted in reactions to create amino acids and the bases used to build DNA’s double helix. It’s as if Titan has been conducting experiments on life formation for millions of years, Turtle says. “Dragonfly is designed to go pick up the results of those experiments and study them.”

Dragonfly is an inspiring selection, adds Lindy Elkins-Tanton, a planetary scientist at Arizona State University in Tempe and principal investigator of Psyche, NASA’s mission to a metallic asteroid. “Titan might truly be the cradle for some kind of life—and whether life has emerged or not, Titan’s hydrocarbon rivers and lakes, and its hydrocarbon snow, makes it one of the most fantasylike landscapes in our solar system.” Given Titan’s complex surface, a lander at a single site would not be able to say much about the moon’s chemistry. Dragonfly leverages the advances in computing and aircraft design that have led to the explosion of hovering drones on Earth. It will carry eight rotor blades, on the top and bottom of each of four arms. It is, in effect, a movable lander, capable of shunting kilometers between sampling sites every 16 Earth days. Titan’s dense air and low gravity will allow the 300-kilogram, sedan-size copter, which will be powered by a radioactive generator, to hover with 38 times less power than needed on Earth.

The timing of Dragonfly’s arrival, in 2034 during Titan’s long northern winter, ruled out a landing near the north pole, home to the moon’s evocative methane seas; those sites would leave it unable to radio home. Instead, the quadcopter will explore the moon’s vast equatorial deserts, which are likely fed by a grab bag of material from all over the moon.

Dragonfly won’t be equipped with a robotic arm, like the recent Mars rovers. Its exploration will first be guided by an instrument on its belly that will bombard the ground with neutron radiation, using the gamma rays this attack releases to differentiate between basic terrain types, such as ammonia-rich ice or carbon-rich sand dunes. Its two landing skids will also each carry a rotary-percussive drill capable of taking samples and feeding them through a pneumatic tube to a mass spectrometer that can analyze their composition. The sampling system represented a risk for the mission; NASA scientists were concerned Titan’s hydrocarbon-rich atmosphere could clog it, ed.

Beyond Titan’s surface, Dragonfly will also target its atmosphere and interior. During flight, it can collect measurements, much like instruments mounted on a balloon

Note: This is just a Industrial Drone frame and landing gear, not including other electronic accessories.