TOKYO - Companies are increasingly competing to develop high-tech agricultural drones for crop spraying and other uses, working to sell their drones to small-scale farmers, who are facing a serious shortage of successors. 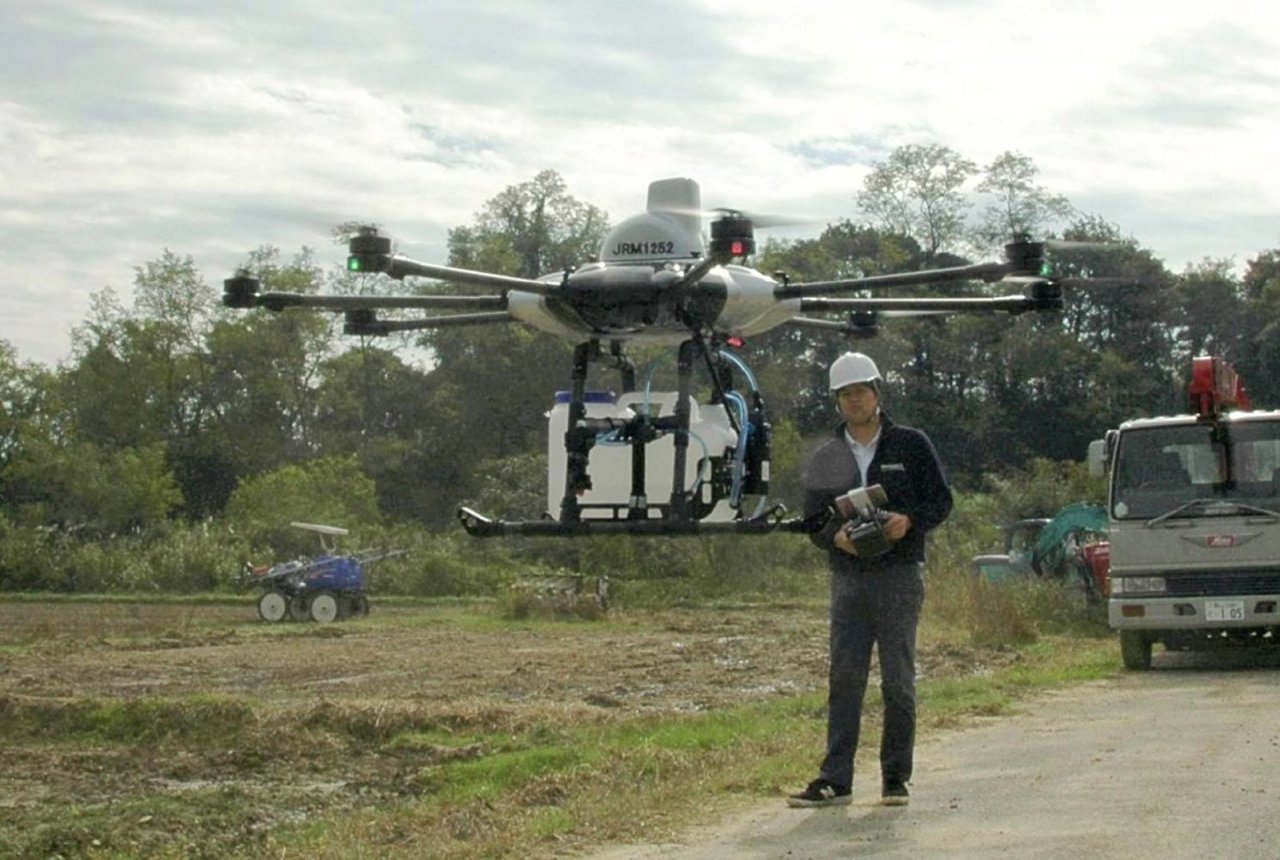 Companies are increasingly competing to develop high-tech agricultural drones for crop spraying and other uses, working to sell their drones to small-scale farmers, who are facing a serious shortage of successors.

For the use of agricultural drones to spread, the key lies in whether the government will allow full automation of pesticide spraying.

A drone two meters in diameter flew over onion fields Wednesday and sprinkled water over them instead of pesticide. The screen of the remote control held by the person operating it displayed the location of the flying drone and areas where pesticide was sprayed. The device was the latest agricultural drone developed by SkymatiX, Inc., a Tokyo-based venture jointly established last year by Mitsubishi Corp. and Hitachi, Ltd.

SkymatiX was demonstrating crop spraying for the media on Wednesday, using the drone on a farm in Koriyama, Fukushima Prefecture. “We’re confident about the stability of the body,” said Zentaro Watanabe, 38, the chief operating officer of SkymatiX.

An agricultural drone has a tank that is capable of carrying pesticides and fertilizers on the lower part of its body. For a farmer using a backpack-style pesticide sprayer, it takes a whole day to spray one hectare of land. However, the drone can do the same task in about 10 minutes. Such drones cost ¥3 million to ¥3.5 million each.

According to a Tokyo-based research company Seed Planning, Inc., the crop-spraying drone market is expected to grow from ¥1.2 billion in 2016 to ¥20 billion in 2022. Many companies are entering the market one after another. “It’s a promising market,” a source close to a trading firm said.

Nileworks Inc., a Tokyo-based venture company whose investors include Sumitomo Corp., emphasizes that its drone can spray pesticide and fertilizer while photographing and monitoring the growing conditions of rice plants in paddies with a camera. The company plans to test-market the drone in May 2018.

Kubota Corp., which began selling agricultural drones in July this year, aims to develop a system to analyze the image data taken by a drone, such as the growing conditions of crops, and have artificial intelligence (AI) provide operating instructions to self-driving tractors.

There are obstacles to the spread of agricultural drones. Under the guidelines of the Agriculture, Forestry and Fisheries Ministry, when a pesticide-spraying drone is used, support personnel should attend the site along with operating personnel to monitor that the drone is not spraying pesticides outside the fields.

Fully automated spraying that can be completed with one push of a button is not allowed under the current system, prompting some to say this causes elderly farmers and others to be hesitant to introduce drones.

The agriculture ministry will hold a meeting of an expert panel early next year to discuss how to ensure the safety of drones and other issues. The ministry then plans to make a decision on whether to allow fully automated spraying within this fiscal year.